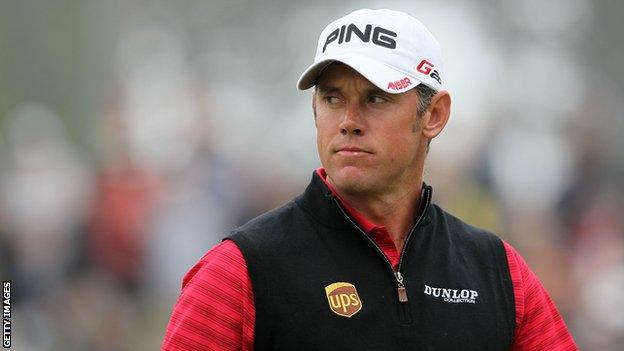 Lee Westwood plans to move to the United States to increase his chances of winning a first major.

The world number three, whose 10th-place finish at the US Open in San Francisco was his 57th attempt to win a major, says the move will give him the best chance of staying at the top.

Westwood, 39, says the British weather has also played a part in his decision.

He added: "There are a number of reasons, but the main one is I haven't got that much time left at the top and I want to give myself the best chance of staying there as long as I can."

He will move with his family by the end of the year, he said.

His US Open hopes effectively ended when he lost a ball in a tree on the fifth hole of his final round. Westwood was in joint third spot, three strokes behind Jim Furyk, at the time.

It was his 14th top-10 finish in majors, including seven top-three placings.

The only other player to have matched that record in majors without winning one was Harry Cooper between 1925 and 1938.

Most of Europe's top stars are now members of the American tour as well.

World number one Luke Donald has been based in Chicago since his college days, Justin Rose and Ian Poulter moved their families to Florida, Paul Casey lives in Arizona, Rory McIlroy rejoined the PGA Tour this year following his US Open victory and Graeme McDowell also divides his time between the US and Europe.

Meanwhile US Open winner Webb Simpson says he does not know if he will be taking part in the year's next major - the Open Championship at Royal Lytham.

The tournament starts four weeks on Thursday and Simpson's wife Dowd is expecting their second child in six weeks.

"Officially I don't know yet. The next eight weeks are going to be up in the air," he said.

However Webb's wife told reporters: "I don't think he is going to play the British Open just in case I go into labour."