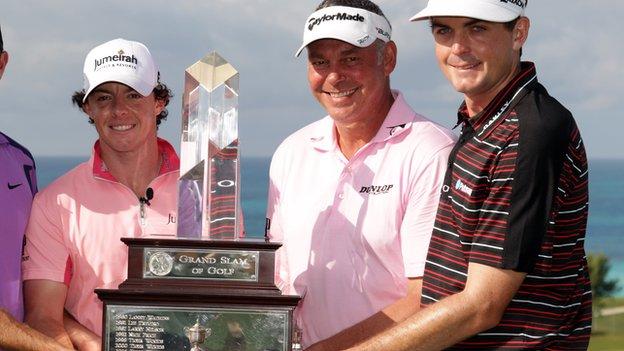 The Irish Open has made European Tour history after tickets sold out for weekend play in the 28 June-1 July tournament at Royal Portrush.

It is the first time ticket sales have been closed for any day of a regular tour event.

Tickets for Thursday and Friday must be booked by 17:00 BST on Friday although it may be possible to purchase tickets for these days on the gate.

Rory McIlroy and Graeme McDowell are among the star players in the field.

The Irish Open has become the bestselling tournament on the tour schedule this year.

"We are preparing for a crowd around the 100,000 mark for the week of the Championship, and with a particularly large spectator audience expected for the weekend, we felt it prudent to stop selling tickets for Saturday and Sunday," said Irish Open Championship Director Antonia Beggs.

"For operational reasons we also have to close the sale of advance tickets for Thursday and Friday at 1700 on Friday.

"Due to the close proximity to the event, it would be impossible to guarantee that tickets bought after this Friday would arrive in time for the start of the tournament."