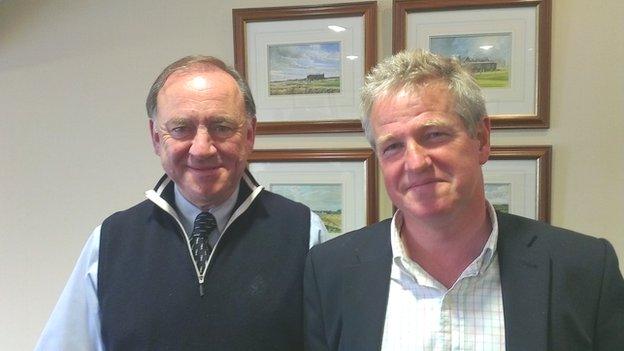 Despite this sporting age of anarchy and upheaval, some people still yearn for "things sacred" to remain. Which is why, the more I see of it, the more I detest the belly-putter in golf.

I suspect, moreover, that I'm not alone, and that Peter Dawson, the chief executive of the R&A, agrees with me.

I've just spent time recording an interview with Dawson, chunks of which will be aired in the coming weeks on The Golf Show on Radio Scotland. Dawson, most will know, is a diplomat, but he visibly shifted when I asked him how long belly-putters would be tolerated in the game.

The R&A are currently conducting "intense discussions" with the USGA about where the governing bodies of golf go with the belly-putter. Dawson, like many, believes that the "anchoring" of the putter against the stomach is contentious, and may give the golfer an unfair advantage when striking a putt.

Another way of putting this is, it is not a pure putting stroke, as golf has intended over hundreds of years. If you think about it, the belly-putter means less judgement and subtlety are required when gripping the shaft and executing the putt.

It is not my job here to pre-empt Dawson and the R&A's final judgement on the legality of the implement. But my hunch is that, down the line, this club will eventually be outlawed.

Golfing purists go so far as to say the belly-putter "desecrates the game". This sounds high-minded and earnest enough, but I have some sympathy for the view. Moreover, when such as Tiger Woods and Ernie Els call for the club to be banned - as both have - then more heat is being added to the growing debate.

What, I suspect, would make Dawson and the R&A more uncomfortable would be such as a Keegan Bradley, who used the belly-putter to clinch the PGA Championship last year, winning an Open with such a putter.

At a time when the governing body feels, at best, uneasy about its use, here would be a high-profile champion in effect telling the world: 'Look what you can do with this thing!'

With equipment in golf there is always the "what-the-public-wants" debate. The designers and manufacturers make their money, not from what the pros are doing, but by the number of Joe Publics who want to copy them. Even if the uptake is gradual, belly-putters are becoming more popular.

If the R&A wish to sort this they better make their decision sooner rather than later. Otherwise, a novelty - to some a gimmick - will start to look like the norm.

I've long held the view that Arran is a golfer's paradise. There are seven courses on the little island off Scotland's west coast, most of which are good, a few of which are terrific.

Obviously we are talking "holiday golf" here; no-one is suggesting the R&A should take the Open to Arran. But Lamlash, like Shiskine, has a number of fine holes, not the least of which is the first, with that burn to be negotiated right in front of you, followed by the steep ascent up to the green.

On the back 9 you also have the Wee Dunt: a hole measuring 94 yards, which is exactly what it says on the tin.

Moreover, some of the views on Lamlash GC are stunning. It is only a par 64 but, on numerous occasions, this has provided me with a fantastic day's golf.