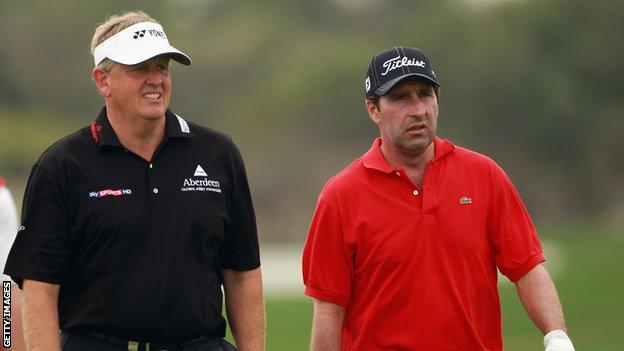 Jose Maria Olazabal and Colin Montgomerie missed out in the Open Championship qualifier, but England's Sam Walker secured his place.

It feels amazing and it's going to be fantastic to play. It'll be one of the best things in my life

Ryder Cup captain Olazabal and predecessor Montgomerie fell just short of claiming one of the 10 spots during European qualifying at Sunningdale.

Walker qualified for the Open for the first time in 10 attempts, finishing second to compatriot James Morrison.

Montgomerie needed to hole a bunker shot on the final hole of his second round to go into a play-off.

However, his shot finished six feet wide, meaning the 49-year-old was only able to add a level-par 70 on the Old Course to his three-under 66 on the New Course in the morning.

The Scot could still feature at Royal Lytham on 19 July with a top-five finish at either the French Open or the Scottish Open.

After his first round 67, Olazabal had at one stage been on target, the Spaniard having got to five under through 14, but he faded to a 71 to miss out by three shots.

"I made a great start," said Olazabal. "But I then had too many putts and when I hit a bad shot on the 16th that was it."

Midlander Walker's qualification ends a long wait to seal his place at the Open, the Brummie having first attempted to qualify 14 years ago at the age of 20.

He followed up a first-round 68 with a 65 to finish on six under, two behind Morrison.

"It feels amazing," said 34-year-old Walker, who made his first appearance in a major when he qualified for the US Open at Oakmont in 2007.

"It's going to be fantastic to play. It'll be one of the best things in my life."

Morrison opened with a sparkling 63 in the morning and followed that up with a 68 to finish top of the leaderboard on eight under.

Southport's Lee Slattery, who also played in the US Open two weeks ago, and Denmark's Thorbjorn Olesen came out on top of a five-way play-off to fill the 10 available European Final Qualifying slots.

Last year's young Open hero Tom Lewis, who tied for the lead as an amateur after a first round 65 at Royal St George's, was nine shots adrift after two matching three-over 72s.

Yorkshireman Danny Willett, who won his first tour event, the BMW International Open in Cologne at the weekend, missed out by four shots.

The 24-year-old flew back from Germany at 9.30pm on Sunday and did not get to bed until 2am.

Willett could still qualify through a mini money list, which ends this week at the Irish Open.

West Ham United midfielder Gary O'Neil failed in his bid to play at Royal Lytham after taking part in the Regional Qualifying at The London Club in Kent.

The 29-year-old shot a seven-over-par 79, but was pleased with his efforts.

"I don't normally hit it as bad as I did but I enjoyed it and it was just one of those things. I was pleased to keep it going and record a score below 80."