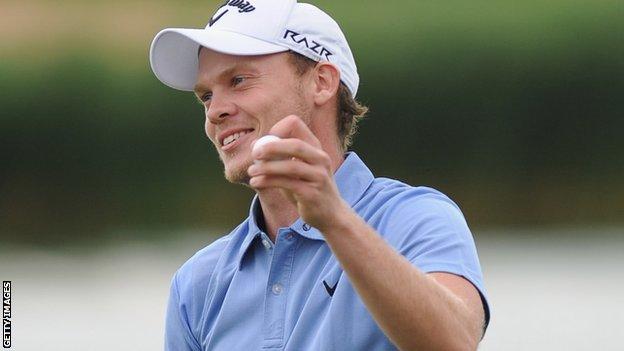 England's Danny Willett took his first victory on the European Tour by winning the International Open in Cologne after a play-off with Marcus Fraser.

The 24-year-old led by three early in the final round but eventually had to rely on the Australian bogeying the last to finish tied on 11 under.

"I've had some ups and downs in the last 18 months and I want to thank everybody for their support," he said.

The Sheffield-born golfer was leading by one shot at the start of the day's play and birdied the third and fourth holes to take a three-shot lead.

But his early progress stalled on the ninth hole when he three-putted, allowing Fraser to draw level, and further dropped shots followed on the 11th and 15th.

The first extra hole saw both golfers par the 18th with Fraser holing from 12-feet, before both bogeyed it at the next attempt, with Willett missing from four feet. At the third time of asking, they parred it again.

Fraser, twice a winner on the European Tour, looked favourite to land the first prize of nearly £270,000 when he was 30 feet away in two and the Yorkshireman went over the green.

But Willett chipped close, while Fraser saw his putt lip out and then missed a four-footer coming back to give the Englishman victory.

The world number 204 now goes to Sunningdale to try to qualify for the Open Championship.