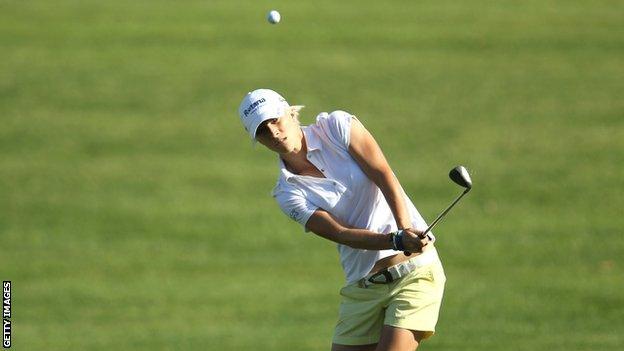 Melissa Reid says she barely felt any nerves during an emotional win at the Raiffeisenbank Prague Masters less than a month after the death of her mother.

The Derbyshire golfer, who was playing her first event since her mother Joy died in a car accident in Germany in May, beat Diana Luna by one shot.

Reid holed the winning putt on the 18th and said: "I wasn't that nervous.

"With something like what's happened to my family and me the last four weeks, nothing seems that difficult any more."

The 24-year-old golfer from the Chevin Club in Duffield started the final round leading by one shot, but after 14 holes in swirling winds she trailed by one.

Reid, who finished on a nine-under par total of 207, after rounds of 68, 67 and 72, added: "I spoke to my coach when I went back a couple of weeks after and he said to me, 'I don't know when it's going to be, but this will make you a stronger person', and my best friends have said that as well and I honestly think it will."

Reid is next in action in two weeks when she competes in the US Women's Open.