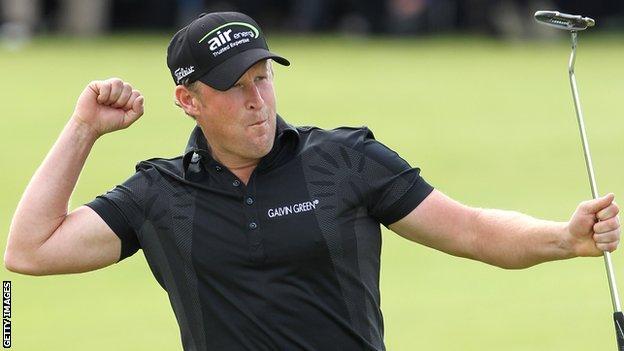 Welshman Jamie Donaldson said he was always confident he would eventually win on the European Tour after ending his long wait for success.

Donaldson finally claimed his first European Tour title at the 255th attempt by winning the Irish Open at Royal Portrush.

The 36-year-old carded a final-round six-under 66 to win by four shots.

"I thought it was going to happen eventually but I didn't know when," said Donaldson.

Donaldson previously had 32 top-10 finishes to his name since turning professional 12 years ago and his last tournament win was the Mauritius Open in 2008.

"I've not played well enough to be sat here as I am. I had a couple of tournaments that maybe could have been a little bit better," Donaldson said.

"Overall this is the week where everything's come together and I've just played great golf."

Donaldson started the day as the overnight leader with a one-shot lead and admitted he felt the nerves before his round.

"I have to say I was nervous at the start. Naturally you're going to be nervous. You're leading a tournament [and] you've not won yet," he said.

"I just kept to my game plan and it worked. I played great golf all week but you just can't let up at any one minute on this golf course. It's that difficult.

"I kept hitting really good shots, kept my head down and didn't look at the leaderboard and here we are finally with the first win."

The Welshman won at Royal Portrush with a new caddie, Mick Donaghy.

Donaldson decided to look for a new caddie despite his last round with James Baker being at Sunningdale when he qualified for the Open Championship.

"James Baker's a great lad and a good friend of mine and caddied for me for five years," said Donaldson.

"Sometimes it's time for a change. It was a mutual agreement and we're still great mates - I think he must be happy to see me win."