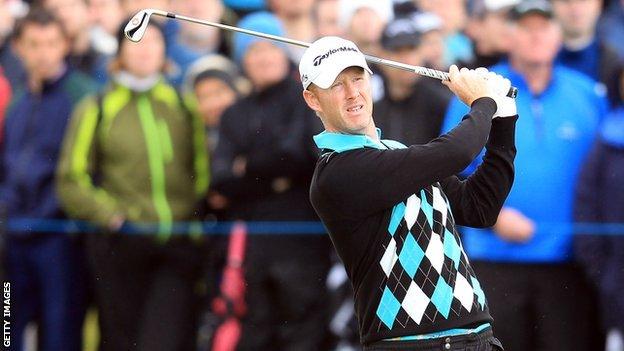 Scotland's Steven O'Hara and Elliot Saltman have both qualified for this year's Open at Royal Lytham.

O'Hara survived a play-off at West Lancashire to make it through.

Saltman edged out compatriot Chris Doak in their play-off at Southport and Ainsdale to secure his second Open appearance in four years.

In 2009, the East Lothian man was at Turnberry with his brother, Lloyd, who missed out by five strokes at Hillside.

It's fantastic, especially to have had my dad Charlie as my caddie

O'Hara, a Walker Cup team-mate of Luke Donald and Graeme McDowell in 2001, had to go to the fifth extra hole to secure an Open debut at the eleventh attempt.

He had finished two strokes behind New Zealand's Steve Alker along with Scott Pinckney of the USA, who also qualified, amateur Richard Bentham and another American Marty Jertson.

"It's fantastic, especially to have had my dad Charlie as my caddie," he said.

"It has made the day really special. It brought back a lot of memories for me."

No Scots qualified at St Anne's Old, where Paul Broadhurst led the way along with fellow Englishman Barry Lane and Argentina's Rafa Echenique.

At Southport and Ainsdale, Saltman finished two strokes behind Denmark's Morten Orum Madsen and qualfied along with Ian Keenan after edging out Doak.

Among the Scots missing out there were Scott Drummond and Raymond Russell.