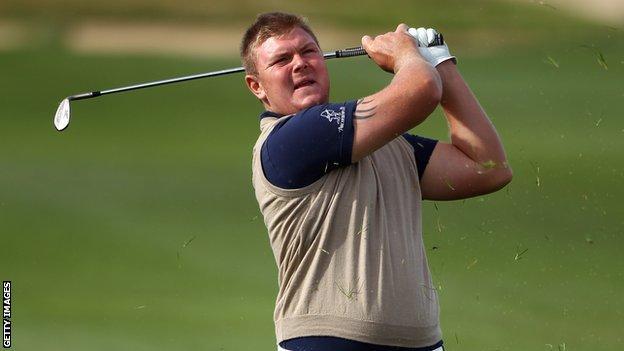 Elliot Saltman is so confident after his latest minor tournament victory, he believes he can win this month's Open at Royal Lytham.

"I want to be up there with the big boys and contend," said Saltman, whose win moved him top of the PGA EuroPro Tour Order of Merit by just ÂŁ8.33.

To shoot 10 under par to win an event like that by eight shots, it was a special week

He had arrived in Ireland on the back of qualifying for the Open via a play-off on Tuesday evening.

"It's been pretty special this week and I'm looking forward to my second Open Championship at Lytham," Saltman told BBC Scotland.

"I went in 09 to Turberry just really excited to be there and soaked up all the atmosphere.

"But, this time, with the way my game is, I don't just want to compete, I feel I can contend."

Saltman last year received a three-month suspension from European Tour and Challenge Tour tournaments after being accused of replacing his ball on a green incorrectly and is looking beyond more success in the third tier.

"My motto is I don't live in the past and things are starting to brighten up," he said.

"I think I'm going to win again on the Euro Pro and, once you get in the top five in the order of merit, you can move on to Challenge Tour.

"But I'm mainly focussing on going to the European Tour school at the end of the year and coming away with a card."

Saltman had thought of pulling out of the tournament in Ireland because he arrived too late for a practice round but on the final day pulled away from Welshman Stuart Manley, who finished second a shot ahead of Scotland's Duncan Stewart.

The Edinburgh man believes that new coach Kevin Craggs has given a more relaxed attitude to the game under pressure.

"My confidence was so high, especially having to birdie the last to get into a play-off for the Open Championship and coming through it," said Saltman.

"I knew it was always there and it was just a matter of time and, to shoot 10 under par to win an event like that by eight shots, it was a special week."