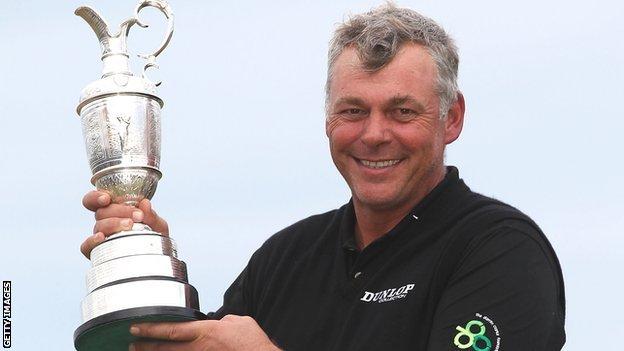 Six-time Major winner Sir Nick Faldo has joined the BBC TV team for the tournament, which starts on Thursday, 19 July.

"I look forward to working with the entire BBC team as we tell the story of what promises to be another historic Open," Faldo said.

Faldo, 54, who won three Open Championships, will join the commentary team for the climax on Saturday and Sunday. He said: "I'm very excited to return to Lytham St Anne's.

"This is both the site of my first English Amateur Championship win way back in 1975 and my first Ryder Cup in 1977. In addition 2012 is special for me as it's the 25th anniversary of my first Open Championship at Muirfield."

Reporters out on the course will be Dan Walker, Russell Fuller and Frances Donovan.

TV coverage begins on Wednesday, 18 July on BBC Two with a half-hour preview programme from 23:20 BST.

Live TV coverage of play begins at 09:00 BST on BBC Two and the BBC HD Channel on Thursday, 19 July and continues daily through the competition with around 40 hours of live action.

The BBC Sport website will carry live streaming of the network feed for UK users only. This includes extended coverage on Saturday and Sunday morning, plus dedicated hole coverage, live leaderboard, highlights, video clips of the best bits of action and interviews.

Audiences on the go will also have live video accessible via the BBC Sport website on mobiles, smartphones and tablets via our new interactive video player

In addition, Nicky Campbell will be live from the course from 06:00 BST on Thursday and Friday for 5 live Breakfast, with all the early action from the course and latest news.

BBC Red Button will offer additional coverage on each day of The Open. Freeview viewers will be able to access live video with leaderboard. Satellite and Cable viewers will also be able to select a three-hole option where you can see play through the ninth, 10th and 11th holes only; plus a daily 30-minute highlights package and live play outside of network coverage at the weekend.

All live coverage will be available on BBC iPlayer, as well as the evening highlights programme.