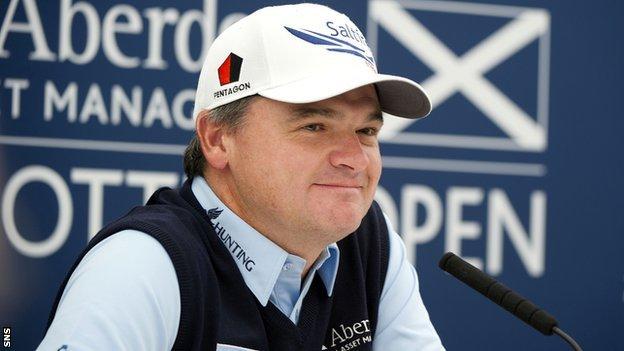 If sporting careers can change, for better or worse, in a flash, then a year in sport is a very long time indeed.

Luke Donald, last year's Scottish Open winner at Castle Stuart, was handed the trophy by the chairman of the event's sponsor, Barclays - one Bob Diamond.

And former Open winner Paul Lawrie had driven along the A96 from Aberdeen to the course overlooking the Moray Firth near Inverness ranked the 140th best player in the world.

Further down the coast, at Balmenie, Donald Trump was promising the world the finest course ever created.

This summer, the leaden skies remain but the rain, so far, is occasional and much lighter, Mr Diamond has resigned from the bank, Lawrie is 109 places better off in the rankings and the event has a new sponsor in Aberdeen Asset Management.

Further, Mr Trump's course has just opened and, crucially, drainage at the course has been greatly improved.

There is, therefore, a sense of anticipation as the organisers aim to show the course and their running of a European Tour event in the best possible light.

For Lawrie and another popular figure with the local fans, the tournament is more than just a chance to limber up for The Open at Lytham next week or to improve their chances of Ryder Cup inclusion.

An Open on home soil - on a links course - gets the adrenaline pumping.

"The Scottish Open is a huge week for all the Scottish boys and all the field," Lawrie told BBC Scotland.

"We loved it last year, the course was great. Obviously the weather took away from it, which was disappointing, but even if the weather is poor it is still a great tournament.

"For me it would be the second biggest win of my career, after the Open, if I could win here so it is a very, very important week for me."

It is unlikely that spectators will be peering at golf balls launched across blue skies over the four days on the par 72 course.

But the light drizzle and occasional downpours have been welcomed by Laird, who may just have been encouraged to try his luck in warmer climes in the US PGA Tour by such weather.

"It's good to be back. I kind of count the Scottish Open as one of the majors," said Laird, who missed the cut at the BMW PGA Championship and the US Open.

"I would be lying if I said I wasn't a little bit happy that it's not supposed to blow a gale this week and the course is softer.

"That will suit me more than if it was playing like a true links."

Of course, one reason for moving the Scottish Open to this scenic part of Scotland from another beauty spot at Loch Lomond was to attract the game's stars by offering them a Highland challenge to hone their links skills in the week preceding The Open.

However, although the still, damp conditions may not be ideal preparations for a field including Luke Donald, Martin Kaymer and Phil Mickelson, with the foul weather extending across much of the UK this week, Lytham is likely to play longer than usual too.

"It will still play linksy-ish, though not as much as we'd like," explained Lawrie, looking relaxed and at ease with the early autograph hunters.

"We would like it a little faster and a bit more running but it isn't going to be that way.

"Even from the rough this week you are going to be able to land it on the green and stop it, whereas normally you would land it short and run it in, but these guys can adapt their games so it shouldn't be a problem."

His countryman Laird does not consider the added attention surrounding his return from the States as unwelcome.

"I treat it as a good thing to have people supporting you, not added pressure," he added.

"I've got some aunts and uncles coming up. It's always fun to play in front of family, I don't get it very much. That's what makes it so nice to come home."