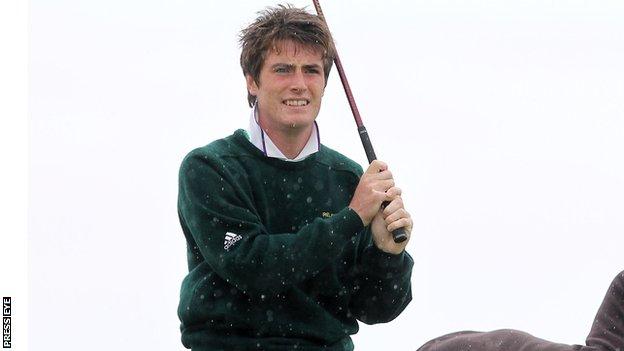 Dermot McElroy came back to earth after his stunning qualifying Dunluce 63 at the North of Ireland as he was beaten in the first round of match play.

The Ballymena man, who missed the cut by only one shot at the recent Irish Open, was beaten by one hole by Dungannon's Timothy Jordan.

Jordan's delight was shortlived as he was then beaten 4&2 by Englishman Ryan Fricker in the second round.

Holder Patrick McCrudden was beaten 6&5 by Eddie McCormack in round two.

Portrush player McCrudden had beaten Ardee's Eugene Smith 3&2 in the first round but slipped four down by the turn against Galway player McCormack.

Those who have progressed safely to the third round including Belvoir Park's West of Ireland winner Harry Diamond and Banbridge's Conor Doran.

Diamond, joint leading qualifier with McElroy, beat Galgorm's Michael Reid 4&2 in the morning before seeing off Massereene's Michael Connolly 3&1 in the afternoon.