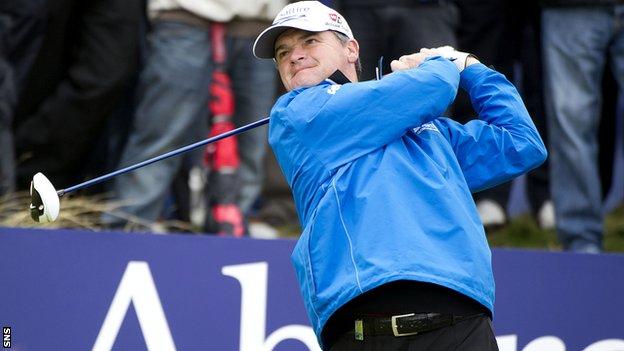 A three-under par second round of 69 was not enough to extend local favourite Paul Lawrie's appearance at the Scottish Open.

Combined with his 73 on Thursday at Castle Stuart, it left the Aberdonian two shots adrift of the halfway cut, which came at four under par.

He finished the opening two rounds at one under, ending his chances of a late call-up to The Open next week.

Lawrie has been one of the form players on the European Tour in recent months and, prior to the first day's play at the Inverness course, he had spoken of his desire to win on home soil.

The 43-year-old was 31st in the world rankings and in eighth place in the Race to Dubai going into the Scottish Open, having won the Qatar Masters earlier this year and having clinched five other top 10 finishes in 2012.

Teeing off on Thursday, Lawrie was third in Ryder Cup European points list, behind Rory McIlroy and Justin Rose.

With the top five places guaranteed selection by captain Jose Maria Olazabal, Lawrie will remain hopeful of being included in the European team but his missing the cut is still a blow to his ambition to face the United States for the first time since shortly after winning the Open in 1999.

Lawrie, caddied by his 16-year-old son Craig, said of his second round performance: "I hit the ball really good and didn't miss a fairway, something I've not done for a long time.

"That's the positive, but putting was the problem again. In fact, it was awful.

"I shot three under having 33 putts (three more than his 2012 average). I've been struggling on the greens the last few weeks, to be honest.

"I know where it comes from, which is the good thing, so it won't take long to fix it.

"I'll put in a couple of hours over the next couple of days.

"It's a pity as you want to put up a decent show in your home tournament, but you can't putt like that and expect to make the cut, never mind contend."

Montgomerie's battle to finish in the top five at the Scottish so that he would be handed a start at Royal Lytham always looked forlorn.

Several players shot rounds to give them a double-figure below par score after 36 holes, with leaders Francesco Molinari and Alexander Noren on 12 under.

While Lawrie and Montgomerie will have a free weekend, other Scots can benefit from home support.

A hole-in-one at the 11th helped Peter Whiteford to a 65 for his second round and he goes into Saturday nicely placed on eight under.

Marc Warren sits on seven under and steady shooting from Martin Laird gave him a 70 to add to his opening 68.

Alastair Forsyth, Steven O'Hara and Stephen Gallacher will also play all four rounds but Scott Jamieson, whose performance at this event last year earned him a late Open call-up, did not make the cut with his two under par tally.