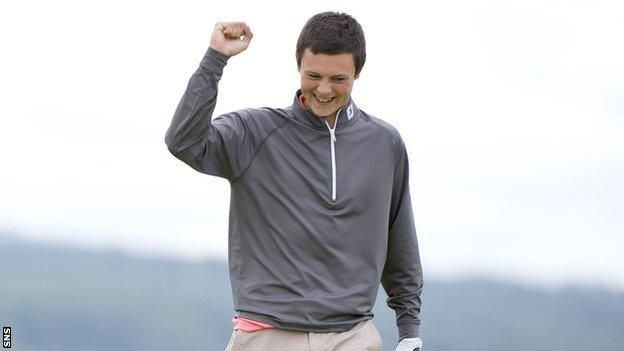 Maths student Jack McDonald hopes to be paired with the world's best player for his final round at the Scottish Open.

The 19-year-old amateur from Kilmarnock carded a four-under par 68 on Saturday to leave him on eight under, having just made the cut at Castle Stuart.

"I wouldn't mind playing with Luke Donald," said the Stirling University applied maths undergraduate. That would round off the week."

Defending champion Donald began his third round on nine under.

McDonald's 68 followed two rounds of 70 and the semi-finalist at the recent Amateur Championship at Royal Troon is clearly thrilled to be competing at the Scottish Open, just outside Inverness.

He told BBC Scotland: "I was a bit nervous for the tee shot on my first round but it was great after that.

"I love playing in front of a crowd. It spurs me on a lot and brings out the best in my game.

"Playing professional events as an amateur is great and making the cut is a great bonus."

McDonald clinched his weekend place at Castle Stuart in dramatic fashion, chipping home from off the green on the final hole of his second round.

It means seven Scots made the cut.

Scots who made the cut

"I had to make a birdie down the last," he added.

"I chipped it up and it went in. It was fate, I think.

"It's great to play golf at the pinnacle of the game, especially as an amateur.

"These last two rounds are just about soaking up the experience before I do turn pro in a few years.

"I plan to get my maths degree out the way first."

McDonald thanked mentor Dean Robertson for helping him achieve his low score, saying he had been "great for my game".

Robertson is the performance coach at Stirling University's golf programme and has been caddying for the student this week.