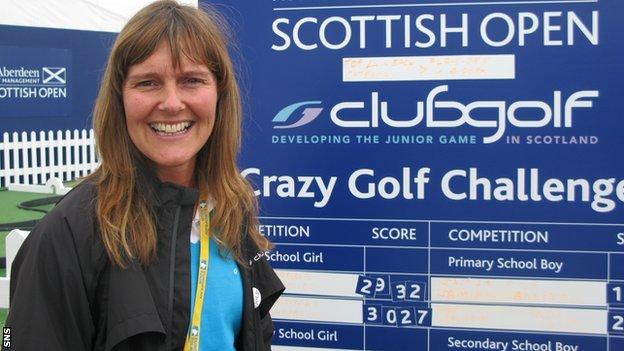 As Scotland stages its national open at Castle Stuart, major programmes are under way in the country to get more children playing golf.

but his presence at the event continues into the weekend and far beyond thanks to his foundation.

It has teamed up with the Scottish government's ClubGolf initiative to offer free coaching to youngsters at the Inverness course.

Set up in 2001, the Paul Lawrie Foundation has a simple mission: to get as many young people playing golf as possible.

The ClubGolf programme has similar aims.

First Minister Alex Salmond, a high-profile visitor to the Scottish Open this week, says the initiative "is laying a solid foundation for the future of Scottish golf by driving participation among our young people".

When Barclays ended its sponsorship of the Scottish Open last year, Aberdeen Asset Management took over in conjunction with the Scottish government on the condition that a series of events before and during the tournament would spread the ClubGolf message.

Jackie Davidson (pictured above) is ClubGolf's national programme manager and is at Castle Stuart with some members of her team to engage with the youngsters.

"It came off the back of the successful 2014 Ryder Cup bid and the desire to include a legacy programme within that.

"To date, we've had 220,000 nine-year-olds being introduced to golf in the primary sector.

"We cover eight regions in more than 300 delivery centres, we had 1,500 volunteers and last year over 38,000 kids went through the programme in primary schools and 12,500 in the club coaching programmes."

Davidson's work includes identifying courses around Scotland that are prepared to welcome novice nine-year-old players who have caught the golf bug in their free lessons at school.

And that school coaching depends upon the help of local authorities and the Active Schools Network.

She claims children from a wider social demographic are exposed to the game through the initiative, which is funded by the agency sportscotland and supported by the Scottish Golf Union and the PGA.

"Because the programme is running in primary schools, a lot of kids who are being introduced to golf are coming from non-golfing backgrounds," she said.

"Previously, young people were coming through the clubs through their parents or grandparents who were already involved in golf."

One of those imparting advice at Castle Stuart is Mark Loftus, the club pro at Mearns Castle in Glasgow.

Loftus, 33, works as an ambassador and a coach for the Paul Lawrie Foundation, having met the Aberdonian through the late coach Adam Hunter.

It teaches young people politeness, respect, understanding, patience and the social aspects of being part of a club

"We have helped about 100,000 kids so far through junior tournaments and events like these," he said.

"If there's a sporting thing to get kids active then we are interested. We just try to spark some enthusiasm.

"You never know if the next Paul Lawrie is here and this is where it starts for them."

Nine-year-old Fraser Connon has been hooked on golf since he was six.

He was at the Scottish Open to watch his hero Martin Laird negotiate the links course but was pleased to take a break from spectating to listen to the advice from Loftus.

"I learned to keep my club face straight; I was putting it squint and hitting it to the right," said the Ellon youngster.

"When I got the club face straight the ball went down the middle."

For Davidson, golf offers more than just the playing of the game itself.

"It teaches young people politeness, respect, understanding, patience and the social aspects of being part of a club," she said.

"We very much encourage the clubs to engage with young people, make them welcome, allow them to come with jeans and hoodies on and before long the kids want the kit.

"And there are quite a few myths around the cost of golf. A small bag of clubs can be cheaper than a pair of football boots."

If the ClubGolf programme can switch such buying patterns in a football-obsessed country like Scotland, there may be a few more Martin Lairds tearing up Castle Stuart in future.