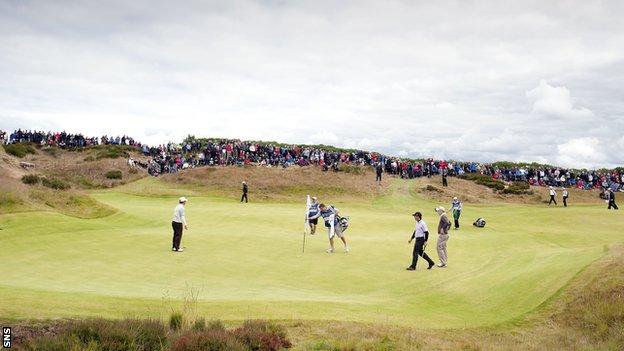 Paul Lawrie didn't win the "second biggest prize" of his career and there was no magical "fifth major" for Martin Laird.

Their scowls, however, did not typify the experience for winner most of the other players, the golf fans, organisers and sponsors.

This was the second time the links course overlooking the Moray Firth had staged the Scottish Open, having taken the high road from Loch Lomond in 2010.

With the 2013 venue yet to be announced, it was essential that the Inverness course delivered a good tournament.

Last year, play was reduced to 54 holes as Castle Stuart's debut as host fell prey to the vagaries of the Highland elements.

But with the rain showers less violent this year and with plenty of sunshine to bathe the golfers and the crowd, the mood has been upbeat.

I feel this is the ideal preparation for the Open

These are healthy figures, though some way short of the fantastic 112,000 at Royal Portrush a few weeks back for the Irish Open.

Scotland's First Minister Alex Salmond held a media conference at the course on Sunday with George O'Grady from the European Tour and Martin Gilbert, chief executive of the new sponsor, Aberdeen Asset Management.

They would not be drawn on where the Scottish Open would be staged next year, but O'Grady did admit that he thought Castle Stuart "would be the running favourite".

The First Minister, whose government had helped to fund the event, claimed that his three objectives to promote golf in Scotland had been fulfilled.

"In our view, it has been a fantastic success this week.

"There are many great views in world golf but I think the views, beamed to millions around the world, across the firth from Castle Stuart must be one of the most extraordinary in world golf."

Golf fans Laurie Taylor and Derek Urquhart travelled from Devon to take in the four days.

"I'd seen it on TV and decided I would like to come here to see it up close and to see the great golfers."

His friend added that he had "just come for the day out and to enjoy all the facilities".

Douglas Murray, a volunteer marshal, said: "I hope it comes here again next year but I'm not sure I'll marshal again because old age is catching up."

The players were also complimentary about the course in their interviews but was it a stiff enough challenge in the week preceding the Open at Royal Lytham?

The first three rounds of the event lent themselves to confidence-boosting low scoring, with still conditions, wide fairways and soft greens deadening the threat from sand, gorse and water.

Prior to Sunday's final round, a stack of players were on double-figure scores under par.

However, the final day's play in blustery conditions produced a spray of numbers in blue on the scoreboard as the curse of the bogey haunted the field - just ask Marc Warren, whose loss of four shots in the final four holes scuppered his chances of winning.

"You need the wind here to bring the teeth out of the golf course," said O'Grady.

"I feel this is the ideal preparation for the Open because it doesn't break you.

"Phil Mickelson said to me that all the second shots into the green, all the short holes, require a different shape of shot, not just a different club.

"You have to move it a different way. He can practise shots he doesn't normally play, for the Open.

"He wants to play the wind shots, the low, punched shots, which is really the attraction of this as an enjoyable and challenging golf course."

O'Grady confirmed that Donald Trump's new, controversial course at Balmenie in Aberdeenshire was not in the running to host next year's event and added that "all the usual suspects" had been in touch to propose that their course be considered.

Other tournaments are already spread around the country - the Senior Open is at Turnberry, Gleneagles hosts the Johnnie Walker Championship and will stage the 2014 Ryder Cup, and the Dunhill Championship is played at St Andrews.

In a few weeks we will learn if Castle Stuart, with its Highland hospitality, is to be rewarded.

The smart money says it will.