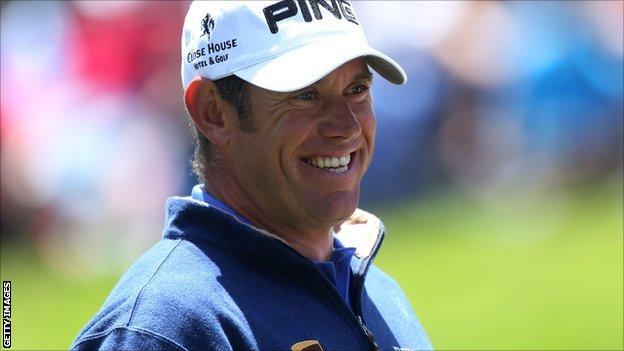 Lee Westwood can win the 141st Open Championship at Royal Lytham this week if he relaxes, says Tony Jacklin.

Jacklin, who lifted the Claret Jug at the same venue in 1969, said his fellow Englishman should clinch his maiden major title if he can putt well.

"Maybe there is an element in those final few holes of Lee trying too hard, rather than just letting it happen," Jacklin, 68, told BBC Sport.

"If he gets hot with his putter and gets into the lead, I think he'll win."

Westwood, the world number three, is playing in his 58th major this week and has had nine top-five finishes, including a second and a third from two of the last three Opens.

The 39-year-old's best chance was at Turnberry in 2009 when he led for much of the final day before bogeying three of the last four holes to miss out on a play-off by one shot.

Westwood, who has won 39 times as a professional around the world, has also earned a second and third from the last three Masters.

Lee is probably the best player never to have won a major, which is not a reputation you want, and he's very aware of that. It must be frustrating for him

"Westwood would be my favourite because of his incredible consistency," said Jacklin, the four-time European Ryder Cup captain.

"Day in day out, when it comes to controlling the golf ball he does it better than anybody in the world and has done it for a year or two.

"Lee is probably the best player never to have won a major, which is not a reputation you want, and he's very aware of that. It must be frustrating for him.

"He's got all the experience and more, but his window of opportunity is getting smaller all the time.

"He's had his chances but just doesn't seem to have taken full advantage. It's difficult - you can only observe and I'm not criticising - but he seems to miss that putt at a critical time during the last three or four holes that just puts him that bit too far behind.

"Maybe when push comes to shove he tries a bit too hard."

England's world number one Luke Donald is also still chasing a first major title and has a relatively poor Open record, with a best of fifth in 2009.

And Jacklin, who also won the US Open in 1970 - the last Englishman to do so - believes the 34-year-old's precision could count against him on the testing links courses of an Open Championship.

"Luke Donald has never really been in contention for a major but we've seen him play some incredible golf outside of that," said Jacklin.

"What he did last year, winning the money lists on both sides of the Atlantic, was nothing less than amazing but he doesn't seem to embrace links golf or his results don't show that.

"I've played a bit with Luke and know him reasonably well.

"His real strength is his short game from 100 yards in. He's possibly the best bunker player on the planet and a tremendous putter.

"But he's not the straightest of drivers and in links golf it's very important to put the ball in play off the tee. He has an incredible ability, in ideal conditions, to control his distance and the amount of spin on the ball, but this isn't such a requirement on links courses where you often have to feel the ball in.

"This preciseness that he has practised and does with monotonous regularity on American-type courses, it doesn't play to his strengths on a links course. I think that's why he struggles.

"But I couldn't give any advice to the best players in the world. As Ryder Cup captain I never tried to tell anybody how to play - they wouldn't be there if they couldn't play. It's going to be their battle with themselves, that's why it's so fascinating to watch."