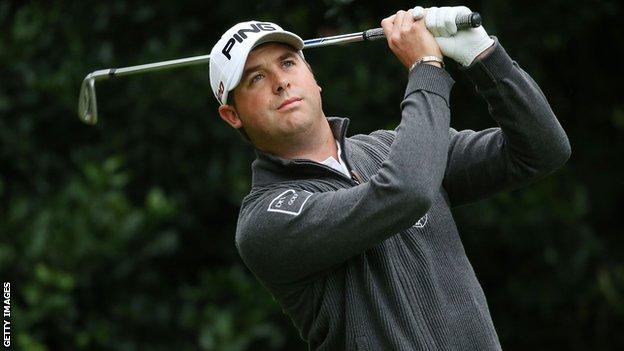 Matthew Baldwin shot five birdies on his Open debut at Royal Lytham & St Annes, then said hearing the cheers was like "scoring a goal at Anfield".

The Liverpool fan told BBC Radio Merseyside: "The first two holes I was really nervous, but I steadied myself."

"I had three birdies in the last five holes, at 14, 16 and 18. And every putt I holed, the cheers were so loud it felt like scoring a goal at Anfield."

After responding to a dropped shot at the short fifth with birdies at seven and nine, Baldwin's round looked set to fall apart with three straight bogeys at the start of his back nine.

But Southport-based Baldwin admitted that it was a case of keeping patient.

"I kept it out of the rough and did not find too many bad lies," he said. "And I'd just been having a moan to my caddie saying that I hadn't holed anything.

Slattery had the chance to finish higher up the leaderboard, but bogeyed at both 17 and 18.

But he was still pleased with his overall form, having posted birdies at the second, the fifth and the ninth, sullied only by a bogey at the third, to go out in 32.

And he then went to three-under with another birdie at the 13th only to stumble late on.

"I played pretty solid," he told BBC Radio Merseyside. "I didn't hit the ball well on the range this morning but there were a few good shots in there, certainly on the first nine holes.

"But I hit a couple of loose shots at the end which I didn't really expect, when I got into bunkers on 17 and 18.

"It was nice to see my name on the leaderboard on the way round. I knew I had to get to three-under to get there and I managed it with a 15-foot putt on 13.

"There were a lot of family and friends out there which was nice. I even had one of my old school teachers as the official scorer with our group."