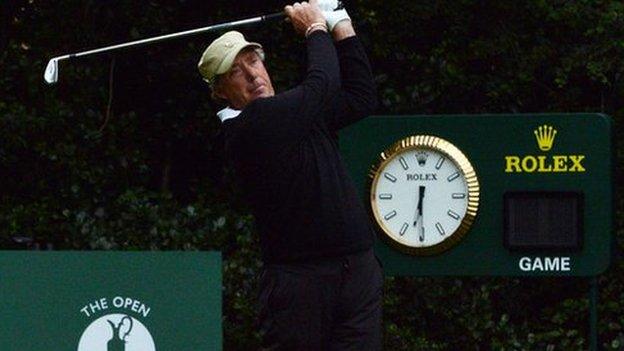 Veteran Barry Lane was up with the larks to strike the first ball of the 141st Open Championship at Lytham, before counting himself well pleased with a three-over 73.

"It's a great privilege to be here at 52," Lane told BBC Oxfordshire.

"If you look at the players who aren't here, I've done very well. I was actually nervous on the first tee."

Lane was a shot better off than Hampshire's Justin Rose, who carded a round of 74.

Rose, playing with Tiger Woods and Sergio Garcia, suffered a nightmare front nine, going out in 39 after bogeys at 1, 3, 6, 7 and 8.

But he then played his final 10 holes in one under, thanks to nine pars and a birdie three at the 13th to offer himself some hope of the improvement he now needs to make the cut.

Rose was just 17 when he first starred at the 1998 Open, when he tied for fourth as an amateur at Royal Birkdale.

Lane is now at the other end of the age scale, having been playing seniors golf for more than two years.

And the Henley-on-Thames-based former Ryder Cup player's preparations were not helped by a cancelled flight from Detroit following Sunday's US Seniors Open.

"We did not get here until late Monday night," added Lane, who has wife Camilla caddying for him. "And I spent yesterday walking around the course like a zombie.

"Then the early morning call today did not help. I've got up at four in the morning to catch flights before but never to play golf. I'm now off for a sleep.

"But it's my 15th Open and, as I don't know if I'll be playing in any more, or even trying to qualify, it's special just to be here."

After a bogey-birdie-double bogey start, Lane then dropped two more shots to slump to four over. But birdies at the eighth and the 10th brought him back until a late bogey at 15 left him on three over - just outside the cut mark.

"I shot one under for the last 12 hours after a bad start, so I'm pleased with that," he added.