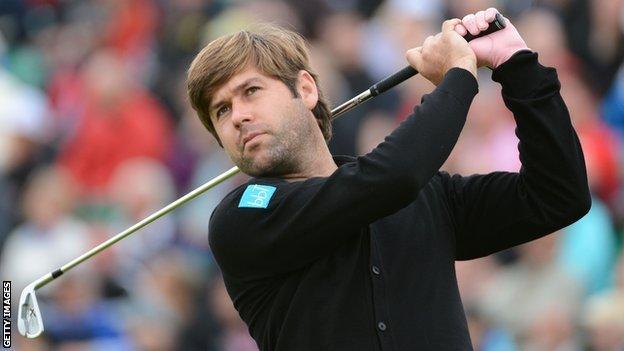 Robert Rock racked up his worst round at an Open as he slumped to an eight-over 78 at Royal Lytham & St Annes.

Fellow Midlanders Sam Walker and Paul Broadhurst are also in danger of missing the cut.

Birmingham-based Walker, 34, managed to pick up just one birdie in a disappointing six-over 76 in what was his first round at an Open.

And 46-year-old Broadhurst, playing his 15th Open, let three shots slip away late on as he carded a five-over 75.

Former Ryder Cup player Broadhurst was level-par from seven holes, after cancelling out a bogey at the third with a birdie at the long par five.

But he then suffered a double bogey six at the eighth before dropping another one at the short 12th.

He got back to two-under with a birdie at 15, but followed that with three successive bogeys and has work to do when he resumes at 07:36 BST on Friday morning.

Rugeley-born Rock suffered a dreadful start, double bogeying the first, before suffering another double at the third.

And, although he responded to a bogey at 8 by birdieing the short ninth, there was further woe on the back nine.

Two more dropped shots at 10 and 12 were followed by a third double bogey of his round at 15 to leave him in danger of missing the cut.

The Staffordshire golfer, now attached to The Belfry, is back out on Friday lunchtime at 12:59 BST.

As for Walker, also attached to The Belfry, he went out in 38, following dropped shots at four and six by also running up a double at the 8th.