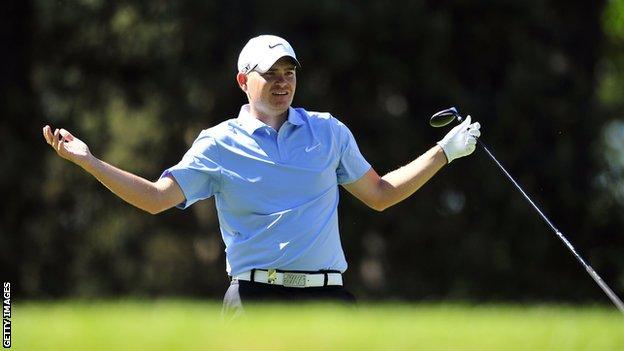 "It's not an easy course," he told BBC Radio Surrey. "But I'm in a good spot. To be under par for my first round in the Open is amazing."

Morrison was the day's leading Englishman, but it was not such a good day for Surrey colleague Ross Fisher.

Despite birdies at the fifth and seventh, he slumped to a two-over 72.

The man from Wentworth, a serious Open contender at Turnberry three years ago, started badly, dropping shots at the first two holes, as well as bogeying the tough eighth and the 14th.

As for Morrison, after eight straight pars, he picked up his first birdie of the day with an eight iron to four feet at the ninth before earning another from 12 feet at 10.

He three putted 12, but returned to two under with an eight iron to 10 feet at the last.

"I was lot more nervous when I played the US Open two years ago at Pebble Beach, where I missed the cut," added 27-year-old Morrison, from Weybridge, who booked his first appearance at an Open by storming through European Final Qualifying at Sunningdale last month.

"But I haven't had time to be nervous this week. It's been manic, especially as we've got our five-week-old son Finlay up here with us and evenings are precious.

"Having him up here too has meant a little lost sleep, of course. But it's still just a pleasure to be here.

"Lytham is a lovely course. A good, old-fashioned course which can still bare its teeth.

"The bunkers are in the right positions and you really have to think your way round."