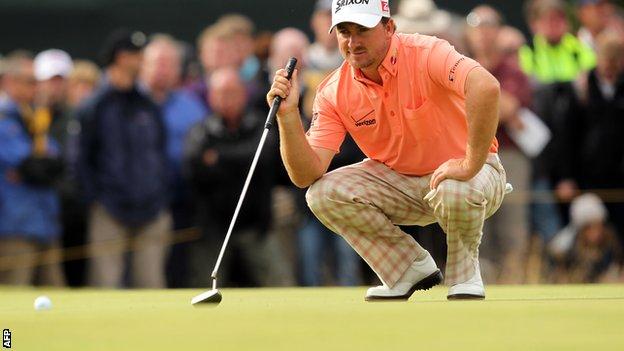 Graeme McDowell kept himself in Open contention with a one-under-par 69 in Friday's second round at Royal Lytham.

After an opening 67, this year's US Open runner-up is on four under par - six behind leader Brandt Snedeker of the United States.

However, Rory McIlroy did not follow up on his good first round, carding a disappointing 75 to lie two over par and just inside the halfway cut mark.

Clarke and British Amateur champion Dunbar improved their positions with 71s while Hoey added a 75 to his opening 79.

"I am right where I want to be, in the Open Championship, a major close to my heart," said a satisfied McDowell.

"Brandt Snedeker has a little bit of light between himself and the field but the rest of us will keep on plugging."

McIlroy found five of Lytham's 206 bunkers and dropped six shots on those holes in his 75.

"I hit the ball well for a lot of the time but I missed a few tee shots," said the world number two.

"I did not commit to them, did not trust myself enough.

"I did not hit as many fairways as I should have and, when you do that, you are going to struggle a little bit."

Two-times winner Padraig Harrington will also be around for the final 36 holes as he is on 142 along wth McIlroy after rounds of 70 and 72.

Clarke felt he had played well, but did not convert his chances.

"It is frustrating to come here to try to defend the title only to score the way I have done," admitted Clarke.

"It has been an honour and privilage to be champion and to represent the R&A around the world. I will cherish the memories forever."