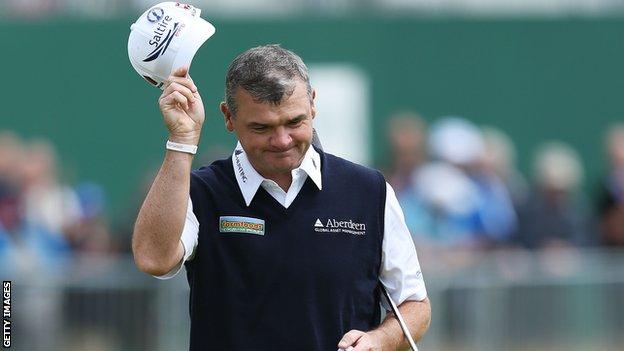 The 1999 champion from Aberdeen chipped in for two of his six birdies.

"It was probably the strangest start of my career, the first six holes - I didn't really hit many good shots and I was three under," he said.

"We get enough bad luck so it is nice when it goes your way. After that I hit some really nice shots, played solid golf, and ended up with a good score."

Lawrie is just one shot behind early pace-setter Adam Scott.

The 43-year-old who came from a major record 10 shots behind on the final day to triumph in a play-off at Carnoustie, received a warm welcome from the galleries.

"I heard my name called a lot today, which down in England is a bit of a surprise," added the Scot.

"It's nice. It's the Open and everyone is here to support the British players as well as everyone else.

"I hit some nice shots for them, which was good."

Asked what had sparked his rise of about 240 places in the world rankings, Lawrie told BBC Sport: "When your 14-year-old kid beats you, it gets you out there and gets you working a bit harder.

"I got a bit lazy with the whole thing. We were half talking about slowing down a wee bit and playing less tournaments and then Craig popped up and beat me.

"I did some commentary on Sky and didn't think I was very good at that so I thought I'd better work a bit harder and get in the gym and try to make a bit of money playing golf again."

Lawrie finished a great opening day with a short birdie putt at the 18th but Craig - who caddied for him as he missed the cut at last week's Scottish Open - and his younger son Michael were not there to witness it, having opted to stay at home to play themselves.

"There were quite a few junior opens back home this week so both of them wanted to stay and play in them, which is fair enough," he explained.

"They're both now decent players. It's a big deal and they wanted to stay home.

"But the courses are shot over there with the rain so they've maybe had a bit of a disaster by staying at home.

"But they've watched it on the television, I'm sure."

Lawrie's previous 65 came in the final round at Sandwich in 1993, when he finished sixth.

Martin Laird went round in level par 70, although it was an eventful opening day for the Glaswegian, who had a double bogey at the third, an eagle at the seventh and holed a bunker shot for a birdie at the last.

Fellow Scot Richie Ramsay is in a tie for 49th place after a 71.