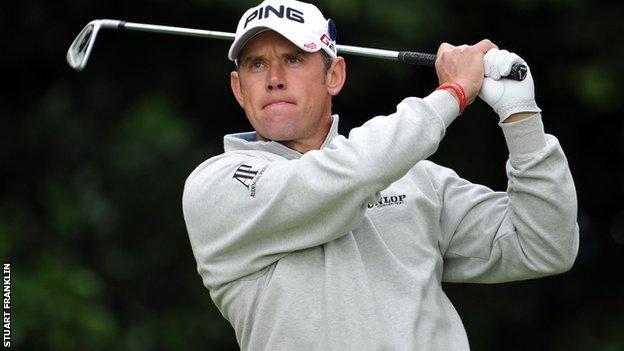 Lee Westwood opened with two birdies on the first day of the Open Championship at Royal Lytham and St Annes before slumping to a three-over 73.

And the world number three then admitted: "I don't feel in control of the ball at the moment.

"You get found out pretty quickly around an Open Championship course, no matter what the conditions are like."

What damage I've done I don't know... but I'll definitely continue on Friday

Nottinghamshire colleague Greg Owen was two shots better off after a 71, but suffered a wrist injury at the 14th.

"I hit it in the rough and jarred my wrist," said US-based Owen, "it's pretty thick rough out there.

"I hit it in there three times. One was fine, the other two were just heinous. Some places you get in you look like you can play it, until you come to hit it."

The man from Mansfield had been sat on one-under when the injury happened, after birdies at the first, 12th and 13th eclipsed bogeys at three and 11. But he then dropped successive shots at 14, 15 and 16 before a final birdie gave him hope for the second round.

I'm at a point now where it goes left or right. I'm not often straight

Westwood's day turned ugly when he ran up a double bogey six at the third. But, after a dropped shot at six, he holed a good put to birdie the seventh, adding another at the ninth.

Out in one-under 33, the day still looked promising. But he dropped four shots in five holes from the 13th to leave himself battling to avoid a missed Open cut for the second year in succession.

"I've been working on it for three or four weeks now since the US Open," he added.

"I didn't feel like I hit it that great there, just sort of got away with a lot. I'm at a point now where it goes left or right. I'm not often straight."