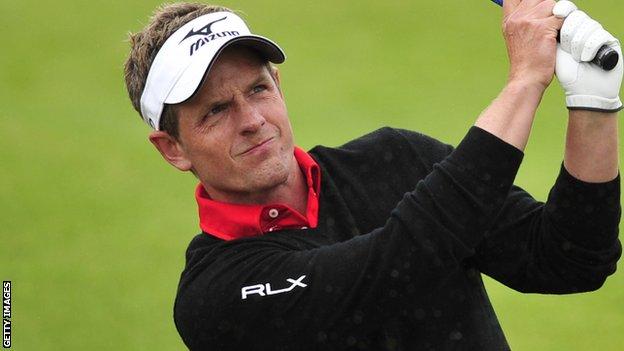 World number one Luke Donald shot a level-par 70 on the first day of the 141st Open Championship at Royal Lytham & St Annes.

After birdieing the third, Donald then carded 14 straight pars before hitting his seven-iron approach off line to bogey 18.

That was a shot better than Woburn's Ian Poulter, who managed just one birdie in his round too.

Whitnell actually managed two birdies - at the third and the 13th. But they came intertwined with bogeys at the fourth, the sixth and the ninth.

"I just wanted to go out out there and enjoy it," the 23-year-old from Tiptree told BBC Radio Essex. "And I did that all right.

"I was more excited than nervous at the first and I'd have taken one over at the start of the day.

"Now I've just got to out and give it 110% tomorrow and shoot something similar.

"It was tremendous walking down 18 at the end. I said to my caddie 'just imagine what this is like for the final group on Sunday'."

Not so happy walking down 18 was Donald after the one error in his round that cost him his only bogey.

"I had a pretty smooth seven iron from 155 into a slight wind, and I should have had a 10 footer for birdie there," he told BBC Sport. "But I just totally came off it.

"That was by far my poorest shot of the day.

"If I had just holed a few putts, I could have got a few more out of that. But it was very workmanlike and I didn't make too many mistakes.

"It was one of those days where I felt like I played pretty solid. Obviously that last hole leaves a bit of a bitter taste in my mouth, but it's still hopefully a round I can build off and an improvement from the last major."

As for Donald's Ryder Cup colleague Poulter, his one birdie of the day came at the sixth, but he then gave it back immediately with a bogey at the long seventh, dropping another shot on the way home at 14.