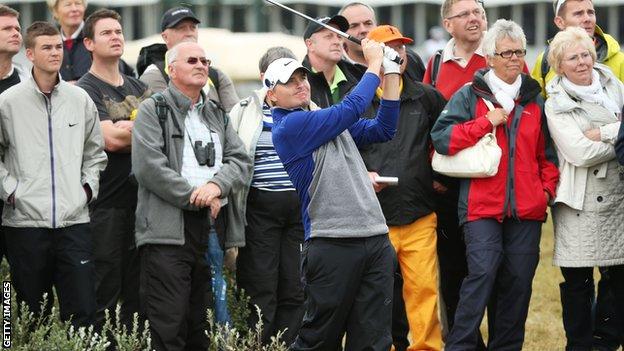 Surrey's James Morrison remained in Open Championship contention at Royal Lytham & St Annes as he followed up his first day 68 with a level-par 70.

The man from Weybridge is jointly tied with world number one Luke Donald on two under - eight shots off the pace.

"If you'd offered me that at the start of the week I'd have taken it and ran," he told BBC Radio Surrey.

Ross Fisher was left to sweat for his weekend place, but just made the cut after his 71 left him on three over.

But the Ryder Cup player would have been comfortably through to the weekend if he had found his touch on the greens.

"I'm disappointed as I felt like I played better than that," said Fisher, a serious Open contender at Turnberry in 2009.

"I just didn't score well enough," he told BBC Radio Surrey. "I played well but I didn't make any putts."

Resuming on two over after a first-day 72, Fisher birdied the fifth. But bogeys coming home at 12 and 17 sneaked him in by a shot.

As for Morrison, he was pleased with his continued efforts on his Open debut.

"I have tried to treat this week like any normal event but the fact that I'm in contention in an Open makes it even better," he added.

"My round today was not too dissimilar to yesterday. I had one bad hole at the sixth where I made double after I'd made two birdies.

"Then I had a run of four holes on the back nine when I birdied the par three, putting my five iron to 15 feet, but then went into the bunker on the next and had to come out sideways to make bogey, sunk a 40-footer for birdie on 14, then dropped another shot at 15 when I missed the fairway and had to chip out sideways.

"And after I'd shot out of the rough and gone 30 feet past, one more roll and I'd have had another birdie at 18.

"It was nice not playing in howling wind and rain, but after two benign days I'm sure the weather will now throw something at us over the weekend."