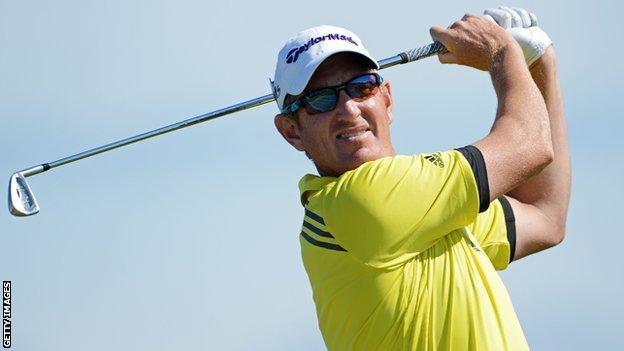 Owen made headlines with an albatross at the par-five 11th the last time the Open was held here in 2001.

And this time he holed his 92-yard lob at 18 for an eagle that almost certainly books his place for the weekend at two over par.

One over for his first round, Owen made a bad start when he bogeyed the second, dropping another shot at the seventh.

He then suffered a third bogey of the day at 17, when he got a bad break in one of Lytham's many rain-filled bunkers.

The front nine holes this morning were, apart from Carnoustie in 1999, the hardest we've played

"It was my best drive all week," he added. "But I ended up in the sand and had to play out of water.

"I knew that meant I might need at least a birdie to make the cut, but it was just nice to get some immediate comeback.

"The front nine holes this morning were, apart from Carnoustie in 1999, the hardest we've played.

"You had to be so accurate. And I just had to hang in there, making it to the turn in a couple over.

"But I was then very happy with the way I played the back nine. I just couldn't convert."

To add to Owen's difficulties, he was struggling with the wrist injury he suffered hitting out of the rough on 14 on Thursday.

Yet 40-year-old Mansfield-born, but now US-based, Owen insists that he never gave any thought to packing in.

"I don't pull out," he said. "I don't think it's correct. I was first alternate at Sawgrass earlier this year and one guy pulled out on the first and another on the fourth, which is frustrating.