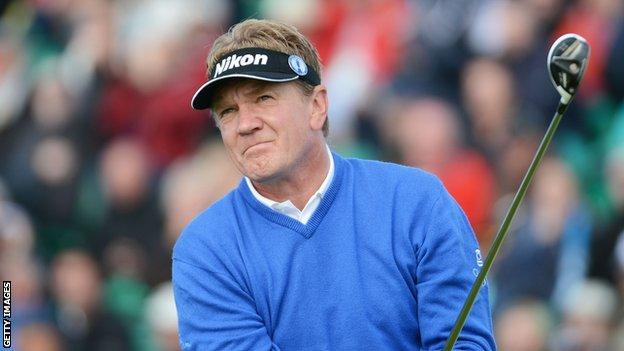 Paul Broadhurst hopes he has not played his last Open Championship after bowing out at Royal Lytham & St Annes with a grim eight-over 78.

Fully 24 years on from his first Open here in 1988, and with 15-year-old son Sam caddying for him, Broadhurst struggled to find his best form.

"It's been a bit of a struggle since I qualified," he told BBC Sport.

"But that's golf. You can't always play as well as well as you want at the Open. Hopefully it won't be my last."

After a first day 75, Broadhurst made a poor start to his second round, dropping five shots in four holes.

He bogeyed the first before running up double bogeys at the third and fourth.

He then birdied the fifth and the seventh before suffering a double for the second day running at the eighth. But he then parred in, except for a triple bogey seven when, having broken his driver on the previous hole, he took a three wood off the 15th tee and went out of bounds.

My playing partner just said to me 'I just sure hope that Charles Howell III isn't the last you get to play an Open with'. And I hope so too

"With three doubles and a treble on your card, you're not going to make much of a score," said Broadhurst with a rueful grin.

"I tried something on the range last night which seemed to go okay, but it didn't work on the course.

"I was hitting it all over the place, I was five over after four and the damage was done. From then on, it was playing for pride.

"And, what with cracking my driver on 14, it turned into a catalogue of nightmares.

"I was telling my playing partner Charles Howell III that it all started for me here at Lytham 24 years ago playing with Jack Nicklaus and Paul Azinger.

"And he just said to me 'I just sure hope that Charles Howell III isn't the last you get to play an Open with'. And I hope so too."

Broadhurst, whose next round of golf will be at Perranporth on a family holiday in Cornwall next week, was also watched by wife Lorraine and youngest son Aaron.

But it was middle son Sam, who got the best close-up view of how his dad performed.

"He didn't get that angry," said Broadhurst Jr, himself a promising six handicapper, who had to get permission to take the week off school in Nuneaton. "He just laughed at it really.

"I tried to gee him up, and it worked on some occasions but it's tough when you're playing bad and he certainly doesn't enjoy it when he's playing bad.

"He gets down sometimes but he always takes it on the chin and always sees the positives, which is a great lesson to learn, as I'd love to be a pro one day.

"He didn't play too great but it was still unbelievable being able to caddie for him. An amazing experience I'll never forget.

"Coming down 18, he said 'Just look around and enjoy the moment'. And I've seen Rory McIlroy, Luke Donald and Lee Westwood on the range.

"So I'm glad they got permission for me to take the week off school. I told them I'd learn a lot from it."

Broadhurst Jr now himself has a big date on Monday at the England Under-16 Schools Championship at Birstall in Leicestershire.

"At least he can practice over the weekend now, said Broadhurst Sr.

As to whether he thinks his lad has learned anything this week, the former Ryder Cup hero raised a smile with his answer to that question too.