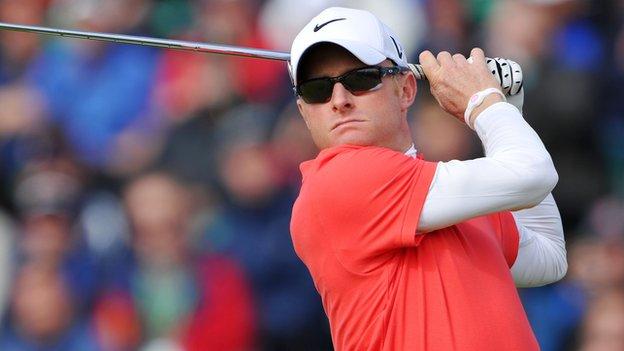 Simon Dyson, leading Englishman at last year's Open, is well-positioned to challenge strongly again after shooting a second round 67.

Following his first day 72 at Royal Lytham & St Annes, Dyson needed to improve and did just that to move to one under for the 141st Open.

But fellow Yorkshireman Richard Finch will be heading home after a 79.

Finch has parred 30 of his 36 holes, but a 10 on the par-four eighth ensured that he would miss the cut.

Coming on top of a triple bogey seven at the third in his first round, Finch bogeyed only four other holes.

But, having failed to birdie in two days, he exited on 13-over, his fate sealed when he got into a mess trying to come out of one of Lytham's notoriously steep bunkers front on.

If you're hitting off the fairway to these pins, there's a few you can attack, and I managed to hole a few putts as well

Dyson, by contrast, made a bad start, bogeying the third. But the man from York had turned it round by the turn with birdies at seven and nine. And he was to have two more coming home, at 11 and 17.

"It's always nice to play the weekend at the Open, it's the best tournament in the world," Dyson told BBC Radio York.

"I didn't drive it very good yesterday and had to really scramble. But I managed to get the ball in the positions I wanted to today.

"If you're hitting off the fairway to these pins, there's a few you can attack, and I managed to hole a few putts as well.

"I knocked it down to about three foot at seven, then I hit nine iron on to about 15 feet at nine.

"At 11, I was quite fortunate as I didn't hit a very good drive. I tried to get it out, left it in the rough and then just tried to bump and run a nine iron, and got it to about 30 feet and managed to sneak one in there.

"The wind was really tough to start with. We played all the front nine into the wind. And then as we turned on about 11 or 12, it turned back into us again, so we played pretty much three quarters of the round into the wind today.

"I did all right last year. I finished top 10, which was nice. Now I've just got to try and finish as high as I can."