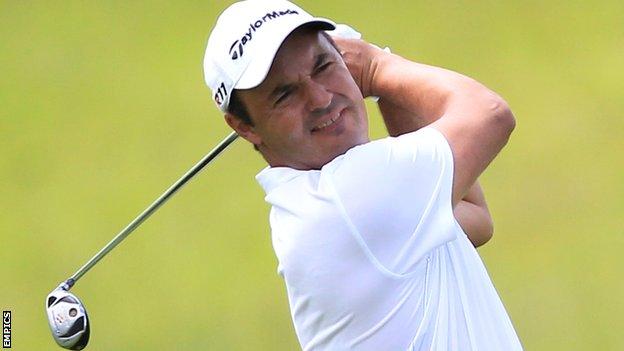 Simon Khan has put himself in contention for his best-ever Open finish after a second solid round at Royal Lytham & St Annes.

The Essex golfer followed his first day level-par 70 by shooting a 69 to stand one under for the 141st Open Championship.

Just a shot behind him on level is another Essex man, Tiptree's Dale Whitnell, after a second round 69.

"I'm just hoping that I can now keep it going over the weekend."

After starting well with birdies at the first and the fourth, Whitnell then gave both shots back when he doubled bogeyed the par-three ninth.

But a birdie at the 17th got him back in to red figures for his round and, allied to his first day 71, saw him make the cut comfortably by three shots.

As for Khan, the man from Chingford told BBC Radio Essex: "I'm not getting too excited.

"But I love playing here and I do know this course well," added Khan, who learned to play this course in his teenage years on visits to his grandparents, who live nearby.

After opening up with a birdie, he was to claim two more, at 8 and 17, each time in response to a dropped shot two holes earlier.

"It was great conditions out there," he said, "although there were four different wind directions in the first eight holes.

"And I do seem to do better between May and July when events come over here. It's great playing in front of big crowds and the support does not get any bigger than this."

Having now made the cut at the last six Opens he has played in, Khan has only really challenged once before, at St Andrews in 2005, when his hopes were wrecked by a third round 78.

"I'd made the top ten going into the third day," he recalls. "But I can learn a lot from that day.

"I lost a lot of patience. I remember trying to force a shot at the 11th which cost me a bogey.

"But the trick is that you've got to be patient, take your medicine and wait for your chance to come."