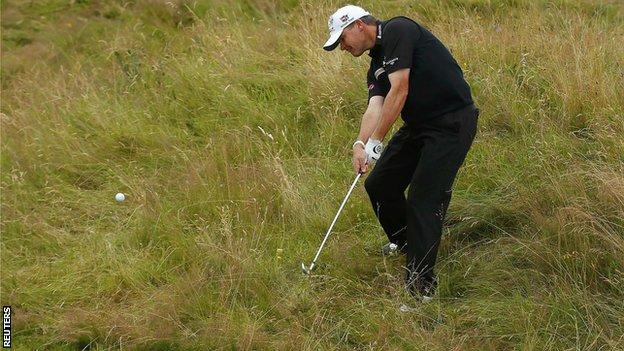 Former champion Paul Lawrie believes he has given himself the best chance to win The Open since his victory in 1999.

But so far the 43-year-old Scot sees no comparisons with that triumph.

The Scot added a one-over-par 71 to his opening 65 to be four under, six behind the leader, American Brandt Snedeker.

I think my one-over-par round was a good effort

"Not really, because I was well behind," he said when asked whether he could see parallels with 13 years ago at Carnoustie.

"What am I now, six shots at the moment? So you're looking to claw a few of them back tomorrow and give yourself a chance."

The Aberdonian is the best-placed Scot with Martin Laird the only of Lawrie's five compatriots to have made the cut after going one stroke better than his opening level-par round.

"There's 36 holes to go and obviously Brandt has played phenomenal golf to be 10 under par - that is world class to be fair," said Lawrie, who has missed the cut seven times since his 1999 win.

"You've got to keep going and keep grinding away and keep doing what you're doing.

"Hopefully you have a couple of under-par scores over the weekend and you're in there roughly with a chance.

"Apart from '99, I've not had any chance to win this tournament, so to go into the weekend, it's a good performance again, a nice run, so hopefully I can keep it going."

Snedeker is one ahead of Australian Adam Scott and four in front of fellow American Tiger Woods - who all play the vast majority of their golf on the PGA Tour - leading to suggestions that a lack of wind and wet fairways and greens means Royal Lytham is playing more 'Americanised' than a traditional links course.

"You're not going to get it any calmer than it has been these first two days," said Lawrie, who is in a group of five players lying in fifth place.

"It would be nice if it blew a little bit over the weekend, but this course is so severe you don't want to any windier than what we've had it.

"The course is pretty tough, as you can see by the scores, and I couldn't quite believe that Brandt got to 10 under.

"I think my one-over-par round was a good effort. I wouldn't say there was any hanging on, I played quite nicely and had a few chances and I was disappointed not to get a birdie on 18."

Fellow Scot Richie Ramsay missed the cut by a stroke after a second-round 73 left him four over par.

The 1985 champion, Sandy Lyle, and Steven O'Hara were two further back despite both improving on their opening-day score by two strokes with 72s.

Elliot Saltman brought up the rear, ending the his campaign on 11-over par after a 75.