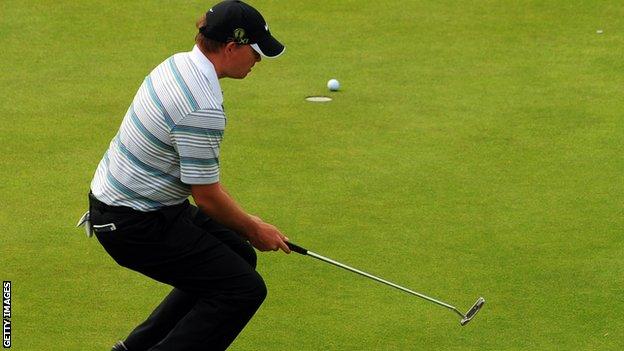 James Morrison has pleaded with the R&A to be "kinder" with their final day Open pin positions after ending day three on level par.

After his chances disappeared with a two-over 72, two better than fellow Surrey golfer Ross Fisher, Morrison blamed the placing of the flags.

"I know it's the best field in the world but we're human beings, not robots," added the Open debutant, 27.

"I agree that you have to make it tougher on a day when you know the weather's going to be set fair. But, wind or no wind, they were unbelievable.

I've just got to try to play better, shoot a low score and see what happens. I've not yet got into Akron or the PGA. And I need a good one tomorrow

"The bloke who did the pins can't have had a very good night. They were incredible.

"And I just hope the R&A are kinder tomorrow."

After starting with a bogey, Morrison dropped another shot at the seventh to the turn in 36.

"It's frustrating," he said. "I didn't putt very well but I had chance after chance. And it leaves a sour taste in the mouth."

Morrison's Surrey colleague Fisher also wasted an opportunity to climb the leaderboard as he fell away to a four-over third round 74.

Having got to the turn in one under, Fisher looked well set, only to suffer five back-nine bogeys.

"I was one under after nine and playing nicely but I hit too many loose shots and didn't hole anything again."

Beginning the day on three over, having only just scraped into the weekend, Fisher parred his first five holes before a bogey at the sixth was followed by birdies at seven and nine.

But five dropped shots in seven holes on the back nine sent him slipping back down the field again and he is on seven over par.

And his only target now is to shoot a low enough final day score on Sunday that might gain entry for either the WGC - Bridgestone Invitational at Akron, Ohio in 11 days' time or the following week's US PGA at Kiawah Island.

"It's not in the nature of us golfers to give up," he said.

"I've just got to try to play better, shoot a low score and see what happens.

"I've not yet got into Akron or the PGA. And I need a good one tomorrow."