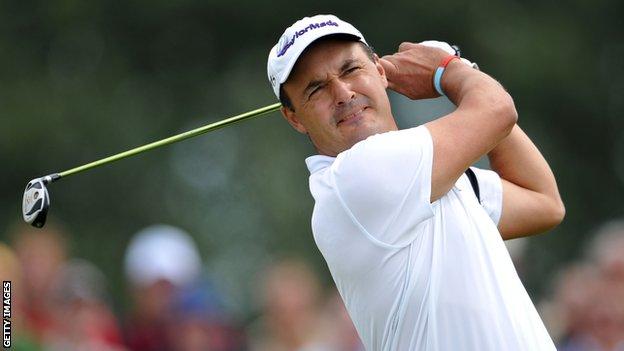 Simon Khan is still hoping for a decent finish at the 141st Open Championship if the wind gets up on the final day.

"It sounds like it's going to blow," he told BBC Essex. "And anything under par when the wind's blowing round here can move you up a long way."

Khan's one-over third round of 71 left him level par for the Championship.

Whitnell told BBC Sport: "It was a bit scrappy. I played nowhere my best."

After bogeying two, three and six, the 23-year-old from Tiptree then responded with birdies at eight and 10.

A bogey five at the 14th took him back to two over, which was where he ended up for the championship after a topsy-turvy birdie/double bogey/birdie finish.

"I could have had a drop in the bunker but I went with my six iron, caught it heavy and ended up in the thick rough.

"But I managed a great response at 18 with three nice shots to make birdie."

As for Chingford's Khan, he was disappointed not to at least match par again as he had with rounds of 70-69 on the first two days.

Birdies came at three, eight, 10 and 13, but he dropped shots at the fifth, sixth and 14th, as well as suffering a messy double bogey on 12 when he three-putted from five feet.

"I actually felt really good today," he said. "I was hitting it well on the range and fancied my chances so to come out and not score under par was disappointing.

"I'm pleased with the way I'm playing and would like to have got myself up into the mix."

A top-10 finish (and an automatic invite back for Muirfield next year) is the obvious target for 2010 PGA Championship winner Khan, who is this week enjoying the last of his three-year Open exemption.

And he predicts that, although it might not actually be him that benefits, if the wind does get up, then any number of players are still in with a chance.

"Top 10 would be a target," added Khan, who grew up playing the course as a teenager when his grandparents lived just down the road.

"I'd love to come back for Muirfield next year and the exemption runs out after this.

"As for winning it, that's achievable maybe for someone a little closer.

"But stranger things have happened. I came from eight behind to win the PGA at Wentworth that day."