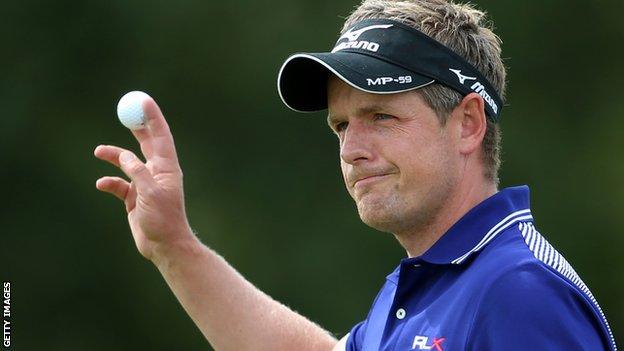 World number one Luke Donald says he is probably too far back to mount a final day Open challenge after shooting a one-over third round of 71.

"Any more than six [strokes] back would be tough to make up. It would need two or three people going backwards."

The Woburn-based professional had hinted at being much better when he birdied nine and 11, either side of a dropped shot at 10.

It was just tough to get the ball close to the holes. There was no wind and the greens were soft

But two poor shots cost him double bogeys at 15 and 17 left Poulter on three over for the tournament.

As for Donald, tied 14th, after a birdie at the third, his hopes fell away when a poor lie in the sand cost him a double bogey at the sixth.

He then bogeyed again at 15, before a second birdie of the day at 17 proved too little, too late.

"I didn't play that poorly," he said. "It was just tough to get the ball close to the holes.

"There was no wind and the greens were soft.

"Two or three under today is a good score. I guess it's a tip of the hat to old architecture."