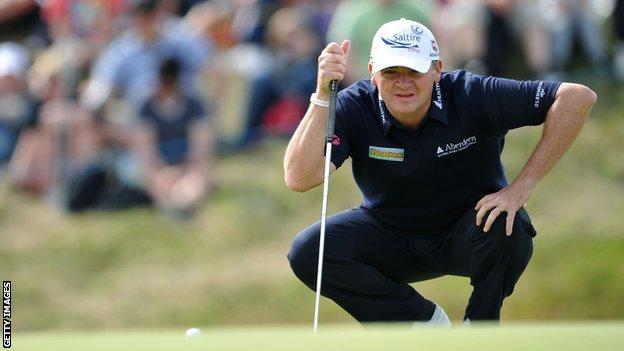 Paul Lawrie was at a loss to explain his poor form on the greens at Royal Lytham as his hopes of winning a second Open title crumbled in his third round.

"I've never, ever, in my career misjudged so many putts," said the 43-year-old Scot after a six-over-par 76.

"You can miss putts but I'm talking about hitting it five and six feet by from 30 feet.

"It's like gone out of my hands almost, which I've never, ever experienced and I hope I don't experience again."

The 1999 Open winner was still in contention at the cut after rounds of 65 and 71 on the par 70 course but Saturday's round left him on a two-over par total of 212, some 13 shots behind the leader Adam Scott.

I think that's the worst I've ever putted in a tournament

"I think that's the worst I've ever putted in a tournament. It was just frightening," added the Aberdonian, who four-putted the last hole for a back nine of 42.

"I don't even know what I shot. It's just incredible."

Lawrie's heavy handedness on the greens contrasted with his play from the tee.

He said: "I played lovely today, magnificent from tee to green. I hit the ball really well but I think I had 40 putts.

Lawrie told reporters that his plan was to spend some time on the practice greens to sort out his putting problems.

"I did a bit of putting this morning and rolled it really good because they said on the TV the pace was a bit quicker than yesterday.

"But it was just horrible out there on the course with the putter - pity."

Another Scot suffering on day three was Martin Laird. He carded a 12-over-par 82, which means he is first to tee off on Sunday.