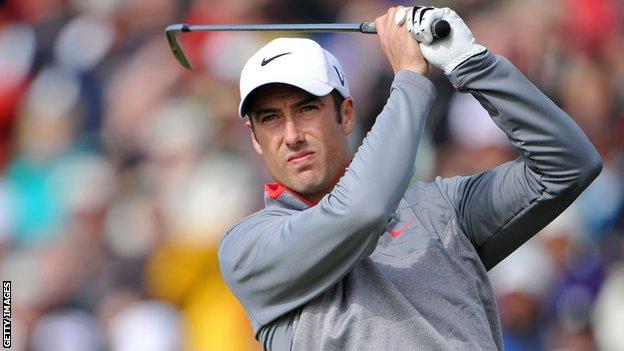 Surrey golfer Ross Fisher was happy to end on a high after a disappointing week at the 141st Open Championship at Royal Lytham & St Annes.

The Wentworth pro finished his round in style to card a one-under 69 and finish six over par.

"It was very pleasing to finally break par round here," the 31-year-old told BBC Surrey.

Beginning the final day seven strokes over, Fisher made a good start, birdieing the second and the seventh.

He then began the back nine with three dropped shots in five holes until he drove the green at the par-four 16th and holed that monster putt for eagle to put the smile back on his face.

After dropping a shot at 17, he then put his approach to within five feet of the pin to get it back at 18 and shoot under par for the first time this week, securing a tie for 45th.

"My game's been pretty good this week," he said. "But I've just not holed anything, apart from that monster at 16.

"It was probably the only chance I had to go for the green today. Some guys were going for it Thursday through Saturday, whereas I'd only been laying up.

"But my caddie said if you're ever going for it, today's the day. And, when the eagle putt went in, it was nice to get an Open cheer like that.

"It was tough getting up at five in the morning.

"But Charles Howell III and I joked on the first tee about what the lowest round in Open history was and although neither of us managed that, we still had fun out there."

Without invites to the Bridgestone Invitational at Akron, Ohio and the following week's US PGA, and having opted to miss next week's Austrian Open, Fisher now has a month off before his next event - the Johnnie Walker Championship at Gleneagles.

"I'll be having a bit of time off with the family," he added. "And that's always nice."