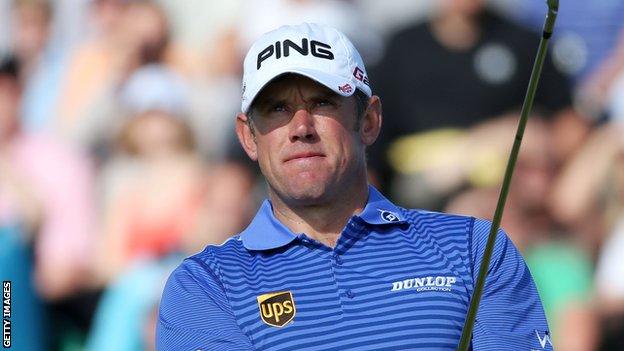 Nottinghamshire's Lee Westwood admits that his efforts at the 141st Open Championship this week have simply not been good enough.

The world number three shot a closing round of 72 to finish six over par - a poor return for the pre-tournament second favourite.

"I didn't have much of a game coming in here, so I didn't expect too much," he told BBC Radio Nottingham.

"You need breaks at an Open and I just hit too many bad shots."

He added: "You'd like to be coming in ripping it, with every part of your game in good shape but you have to make do with what you've got.

"I feel pretty calm at majors. I've given myself a lot of chances and nearly won quite a few.

I'm looking forward to playing in the States again. I'm not doing it for the sake of it. Playing over there should have a big effect

"And rarely do I get in bad moods. If you play golf long enough you have to be phlegmatic about it."

After birdies at two and three in his final round, Westwood then dropped four shots in five holes before a run from the ninth which saw him go birdie/bogey/birdie/birdie.

But two more bogeys at 15 and 17 proved a frustrating finale as he ended tied for 45th.

Westwood's next task will be back in Nottinghamshire on Monday, presenting trophies to juniors at his club at Worksop.

He will be 40 by the time he tees it up at next year's Open Championship at Muirfield but will have improved his major chances by playing most of his golf on the US Tour.

He flies off to the States on Thursday to begin his preparations for the Bridgestone Invitational at Akron, Ohio, followed by the US PGA at Kiawah Island a week later.

And, with the Fed Ex Cup and the Ryder Cup in Chicago to follow, his thoughts are already very much turning to America - and his new life there.

"And I'm looking forward to playing in the States again. I always seem to well at Akron.

"I've got a good run coming and I'm excited to be playing Fed Ex Cup for the first time.

"I'm happy with the schedule I've got. I've changed it to incorporate more US PGA Tour events and I shall play more over there next year.

"I'm not doing it for the sake of it. Playing over there, with the sort of practice facilities they have and that sort of weather should have a big effect.

"Three of the four majors are played there.

"It's a big decision when you move the family a long way. And everyone's excited about it. We've been thinking about for a couple of years now."