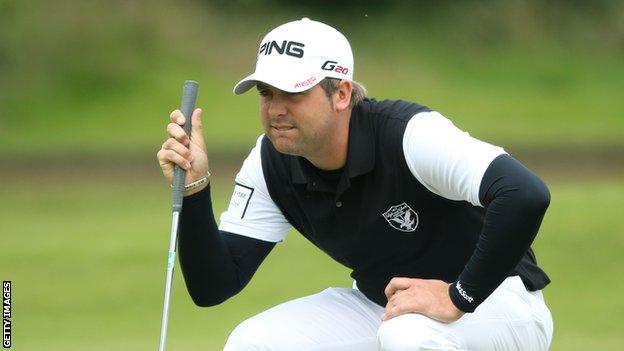 Southport's Matthew Baldwin made his first Open Championship one to remember as he carded a final day one-over 71 to finish tied for 23rd.

And only a double bogey six at 17 cost him a top 10 finish and an automatic invite back next year.

"It was a lot tougher today and the scores reflect that," the 26-year-old told BBC Radio Merseyside.

Meanwhile Southport colleague Lee Slattery finished on nine over par after a closing round of 73.

After dropping four shots in as many holes, he responded well with birdies at the fifth, seventh and ninth. But two more bogeys then came at 14 and 15 to leave him tied for 64th - but £11,900 better off.

"I got off to a bad start," Slattery told BBC Sport.

"But, in general, I played pretty well.

"We had a great draw as, for the first few holes, there was hardly any wind.

"It didn't start picking up until the sixth or seventh when it turned to the usual wind direction again."

The 33-year-old's next challenge now comes in a fortnight's time at the Bridgestone Invitational at Akron, Ohio.

As for Royal Birkdale member Baldwin, after last weekend's tie for fifth at the Scottish Open, with another decent-sized cheque banked for £38,438, and a rise to 59th in the European Tour rankings, his whole season has truly taken off.

And he was so close to making it even better on a course he knows well.

I have to keep learning lessons and the main one this week is to be patient. I hope I can move forward from here

After a second hole birdie was spoiled when he dropped three shots in successive holes just before the turn, he recovered well with birdies at 11, 14 and 16 to go level par for the Championship.

But then came that expensive double at 17.

He now has four weeks off before the Johnnie Walker Championship at Gleneagles, when he will be out to build on a solid week here, having twice broken par.

"The Open's the greatest tournament in the world and the whole experience has been great," added Baldwin.

"I have to keep learning lessons and the main one this week is to be patient. That's what gets you rewards.

"To be in the top 25 is a great achievement for me. I've learned that I can play with the very best and I hope I can move forward from here."