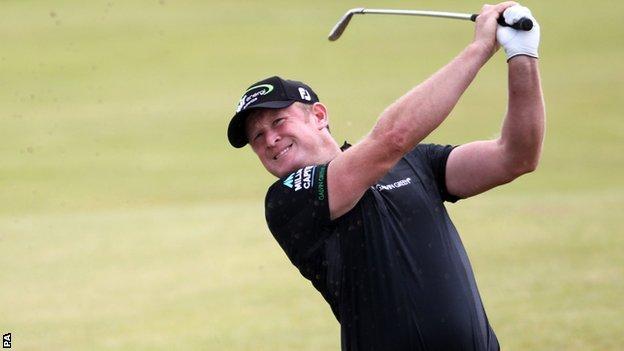 Jamie Donaldson was "disappointed" with his efforts in the Open at Royal Lytham & St Annes where he tied for 60th.

The Welshman hit a final round 76 for an eight-over-par total of 288, having carded 68 in the opening round and 72 on the second and third days.

Donaldson had hopes of making his mark following a first European Tour title victory at the Irish Open at Royal Portrush at the start of July.

"Not the best - I didn't really play great," was his summation.

I had the chances to sort of get it back to respectability, but it didn't happen

"The wind was tricky today and I didn't really play well enough to produce a decent score.

"I had the chances to sort of get it back to respectability, but it didn't happen.

"So overall a bit disappointed, but there you go, that's golf."

Next up for 36-year-old Donaldson is the Bridgestone Invitational, part of the World Golf Championships, at Firestone, Akron Ohio from 2-5 August.

He then heads for the next major in the 2012 calendar, the US PGA at Kiawah Island, South Carolina on 9-12 August.

"I go to Bridgestone in America and then I go to the US PGA so I've got a great run of tournaments coming up," said Donaldson, the only Welshman in the Open field.

"So we'll see if we can pick up the game over the next week and be more than ready for those events."