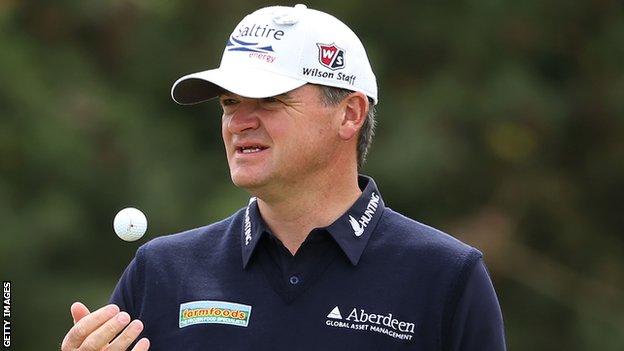 Lawrie closed with a round of 72 for a four over par total, having been among the leaders on Thursday and Friday.

"I played nicely and just putted like an idiot again. Thursday I putted beautifully, so it's just a bit weird," said the 43-year-old.

"I just holed nothing out there, it is so disappointing. I think frustrated would be an understatement."

The 1999 winner opened with a 65 and followed that with a 71 to remain at the top end of the leaderboard.

However, Saturday's 76 saw his challenge fade and he finished the week in a tie for 34th place, 11 shots behind victor Ernie Els.

"I think I've hit the ball this week, not as good as I can, but extremely well," added Lawrie.

"Had I been top-10 this week, I think it would have been fair enough.

"But you get weeks like this, when you play well but don't putt well.

"And then you don't play well and you hole everything!

"This is a week when you have to get everything together. You can't have one part way off, which was my putting.

"I was two over today and I should have been two under.

"I must have missed with seven or eight efforts from inside 10 feet."

Lawrie will now have the whole of next week off to undertake a sponsored walk, together with his wife Marian and two other couples, along the 79-mile Great Glen Way from Fort William to Inverness to raise money for the Paul Lawrie Foundation and Leukaemia Research Beatson in memory of his coach and friend Adam Hunter, who died from leukaemia last year.

"I'm ready for just a bit of a break," he said. "Even with the week off for the French Open (earlier this month) I was quite busy that week, whereas next week there will be no golf at all involved.

"I won't hit one ball, which will be nice. The next ball I hit will be in Akron (at the WGC-Bridgestone Invitational starting on 2 August)."