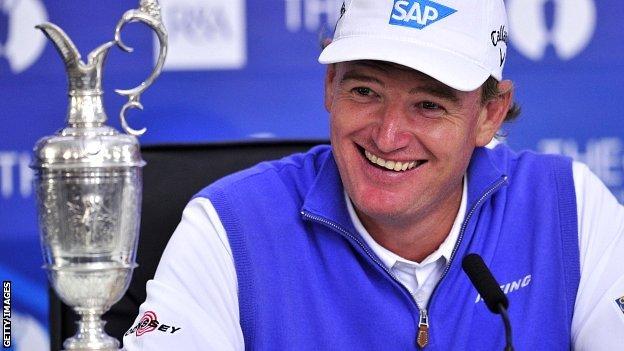 Ernie Els urged his friend Adam Scott not to dwell on losing the Open at Royal Lytham & St Annes.

The South African in a dramatic finish on Sunday afternoon.

"I told him 'I've been there many times and you've just got to bounce back quickly. Don't let this linger'."

Els, who also won the Open in 2002 at Muirfield, trailed overnight leader Scott by six strokes at the start of the final round and was still six adrift at the turn.

But four birdies on the back nine, including a long putt from across the green on the 18th, coupled with the Australian's four closing bogeys, gave the 42-year-old Els victory by one shot.

Els fired a final-round 68 to Scott's 75 and was four clear of Americans Tiger Woods and Brandt Snedeker.

"Amazing, I'm still numb. It still hasn't set in," said Els, who was ninth at last month's US Open. "It will probably take a few days because I haven't been in this position for 10 years, so it's just crazy, crazy, crazy.

Just got the news about Ernie winning the Open! Icing on the cake after a phenomenal day for us.

"I just felt good. It's hard to explain. For some reason I felt something good was going to come out of this."

Els, who has finished runner-up in six other majors, said he believed Scott could go on to surpass his haul of four major titles.

Els, who has dropped to 40th in the world rankings, missed the Masters for the first time in 19 years this season after failing to receive an invite from Augusta officials.

"This is unbelievable. Considering they didn't give him an invite to Augusta... I think this will make those guys think a little bit now," said Els's caddie Ricci Roberts.

"He was gutted. A player of his calibre. The golf ambassador he has been and, even more so, the way he was playing going into Augusta.

"It is not for me to call, they have their rules and regulations and they work by those, but I think it was sad he didn't get in."