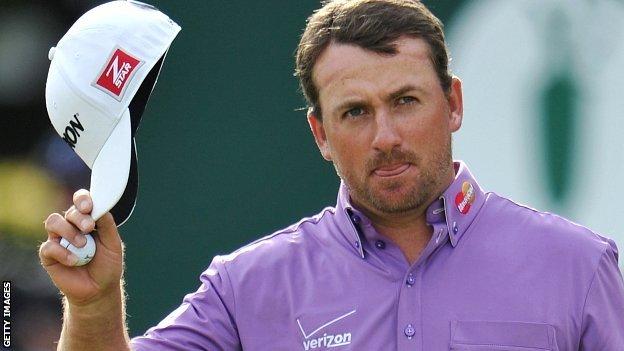 Graeme McDowell tied for fifth place at the Open Championship at Royal Lytham and St Annes after carding a final round of 75 to finish on two under par.

McDowell started the day in joint second on seven under, but began his round badly with bogeys at the second and sixth holes.

Adam Scott collapsed over the final four holes to end six under, with Brandt Snedeker and Tiger Woods three under.

It's the longest walk in golf, and believe me, the cart ride doesn't make it feel any shorter

McDowell still harboured hopes of collecting his second major title after his birdie three at the eighth, but then bogeyed the next three holes to drop out of contention.

The former US Open champion was fortunate to drop just one shot at the 11th after duck-hooking his second shot from the middle of the fairway into the bushes on the left.

His buggy travelling the wrong way along the 11th fairway, Graeme McDowell sat hunched over with his elbows on his knees.

After a fruitless search for the ball with his caddie and some spotters, he hopped onto the buggy to retake his shot.

"It's the longest walk in golf, and believe me, the cart ride doesn't make it feel any shorter," McDowell said. "It was gone for me."

Further bogeys followed at the 15th and 17th, with just a birdie at the 16th to cheer the Northern Ireland player.

"It was a tough day at the office, no doubt about it," added McDowell.

"But I'm not splattered on the floor right now in disappointment. I'm just a little frustrated.