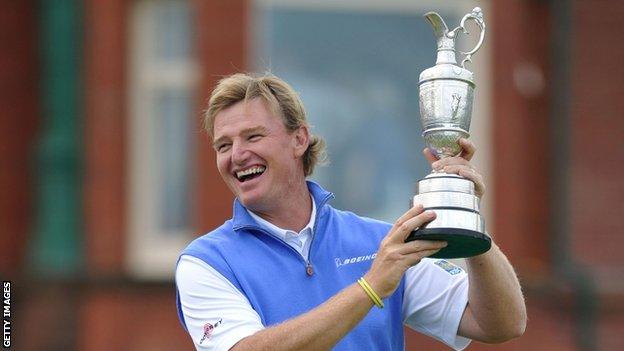 Ernie Els, the 2012 Open champion. In truth, how many dared to believe these words could come true?

The stories coming out of Lytham will be all about Adam Scott's spectacular disintegration, in which the Australian blew a four-shot lead from the 15th tee, but just as amazing is this conquest by Els.

A full 10 years after his last major triumph, the 42-year-old has now joined the exalted company of Bobby Jones, Walter Hagen, Jack Nicklaus, Lee Trevino and Tiger Woods in winning two majors on either side of the Atlantic.

Not only this, but Els, who spoke at the recent Scottish Open of "feeling something returning", pulled off this Open triumph after years of being condemned as "golf's great unfulfilled talent" and "a spent force".

"He has done it at a stage in his career when his best golf seemed behind him," wrote Doug Ferguson, the much-travelled and respected American golf reporter.

Els, who started Sunday's final round six shots back, carded a closing-round 68, which included a 4-under-par back 9, to steal victory from the clutches of Scott, who bogeyed the last four holes while shooting a 75. The Australian suffered one of modern golf's most grisly collapses.

Huge sympathy went out to Scott, but seasoned golf observers were also doing a jig of celebration for Els.

From the very off, this South African was fated to play during the Tiger Woods era, a time when otherwise stellar golfers were so often made to take second place.

Having won the US Open in 1994 and 1997, and an Open Championship in 2002, Els was also viewed as having lost his way, in part due to the attention he wished to give to his son, Ben, who suffers from autism.

In truth, even Els's fans had started to view him as a yesterday's man, and that perception appeared to be underlined when he failed to even meet the qualifying criteria to play in the 2012 Masters.

A modern Masters without Els in the field almost seemed a sacrilege, but it appeared the way the golf winds were blowing. Yet here we are three months on and Els has been crowned Open champion again.

"I feel numb about it - I guess it might sink in a little later that I've won," Els said on Sunday night, after paying his tributes to, among others, Nelson Mandela, in his victory speech.

This Els triumph is one of the greatest comebacks in modern golf.

It doesn't deserve to be submerged beneath the debris of Adam Scott's infamous collapse.

The Senior Open Championship is being played this week (July 26-29) at Turnberry, reminding me again that, even after they have turned 50, some of the world's greatest golfers are still worth watching.

I plan to head down to Turnberry for a couple of days to present features for The Golf Show from the Ayrshire coast.

But, work apart, I'd go anyway just to see the way some of these guys - as Watson proved in the Open at Turnberry in 2009 - can make their talents endure.