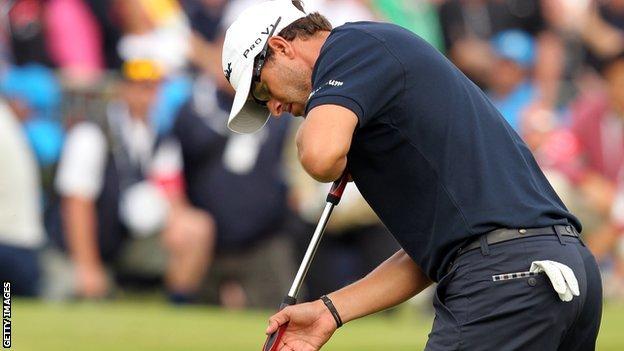 While Adam Scott must wonder how he will recover from the collapse that helped hand the Championship to the big South African.

Scott's failure to convert a four-stroke lead down the closing stretch of holes into his first major title threatens to haunt the popular Australian for the rest of his career.

The pain is made all the more acute because Scott falls into the category of "major champion in waiting" having won at every level of the game below the elite four championships.

It will take enormous mental strength from the 32-year-old to overcome this disappointment and Scott's task may be made all the harder by future rule changes over putters.

An announcement is expected this autumn which will determine whether the use of broom-handle and belly putters is to be outlawed.

In the Open just gone it was Els's belly putter that sank the decisive putt to thwart Scott and his broom-handle implement.

Following the successes of Keegan Bradley at last year's US PGA and Webb Simpson at this year's US Open, Els's triumph means three of the last four majors have been won by players anchoring an extended putter in their midriff.

"The R&A and our co-governing body, the USGA (United States Golf Association), have this firmly back on our radar," said the R&A's chief executive Peter Dawson.

"From a method of stroke standpoint the issue is the anchoring of one end of the putter and is this a conventional golf stroke?

"For all the talk of savage rough, the 141st Open Championship will be remembered for the smoothness of Els and sympathy for Scott."

"There's been a big change in the last two years. We've seen long and belly putting go from a method of last resort for people whose conventional putting stroke has deserted them to a preferred method of people who can putt conventionally perfectly well."

Dawson stresses no final decision has been taken but there is a strong feeling that the authorities are about to call time on the anchoring method.

This, of course, would have a detrimental affect on the new Open champion but any rule change could not come into effect until the beginning of 2016.

"There are further meetings to be had and details to be ironed out. It will be a committee decision and the rules may be changed, we will have to wait and see," Dawson added.

"This is something we have to make our views known on pretty quickly."

The implications are far reaching. Els has saved his career by adopting the anchoring method to cure his problems on the greens and with his Lytham victory the 42-year-old should now be able to look forward to an Indian summer to his playing days.

His win, like Darren Clarke's last year, was the stuff of fairytales and the product of golf's current unpredictability. But the joy of seeing such a popular winner taste major success again was tempered by the sympathy that must be felt for the poor Scott.

What else did we learn at Lytham? The failure of Lee Westwood to bring his A game to a course that was set up to his strengths was hugely disappointing and landing that elusive first major is becoming ever harder to achieve.

Rory McIlroy is discovering that golf is actually a very hard game to consistently conquer. He will feel he was too easily derailed by his second-round double bogey at the ninth.

McIlroy spent the rest of the week searching for his swing and he couldn't find it.

Luke Donald collected yet another high finish without contending. Trying to the very end and maximising a finishing position should never be criticised.

Worryingly, though, he failed to find the moment to push beyond guarded steadiness to find his way to the top of the leaderboard.

Donald, though, remains one of the very best exponents on the greens. If he can retain that touch until 2016 those skills will carry a far higher premium if the belly and broom-handle brigade are forced to find another way to putt.