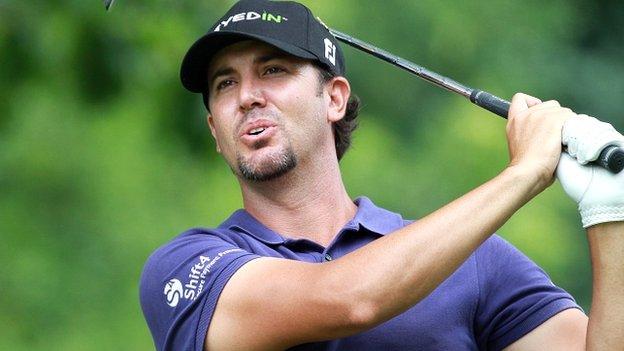 America's Scott Piercy won the Canadian Open by a shot after firing a final-round 67 to beat countrymen Robert Garrigus and William McGirt.

Piercy ended on 17 under par, with overnight leader Garrigus only able to card a 70.

McGirt ruined his play-off chances with a bogey on the last.

England's Gary Christian finished tied for 10th on 10 under par after a final round 66, while Open champion Ernie Els missed the cut.

Other than Christian, Fiji's Vijay Singh was the only other non-American in the top 10, finishing tied for seventh after a 67.

Garrigus had started the day on 16 under - one shot ahead of McGirt and two clear of Piercy - breaking a 54-hole record set more than half a century ago by Arnold Palmer.

But his round failed to fire and despite a birdie on 14, he dropped a shot on the par-three 16th.

McGirt moved to 18 under before the turn but two bogies on the final four holes ended his challenge, leaving Piercy to profit from a strong front nine and secure his second PGA Tour victory.

On the European Tour, local hero Bernd Wiesberger shot a final round 65 to win the Austrian Open by three shots, his second European Tour title.

Irishman Shane Lowry and Frenchman Thomas Levet tied for second on 16 under, while third round leader Thorbjorn Olesen dropped out of contention with a 74.

And in the Senior Open Championship at Turnberry, 52-year-old American Fred Couples birdied the final two holes to clinch victory on his first appearance at the event.