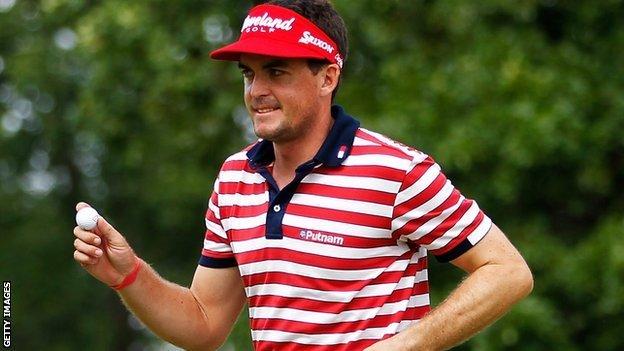 Keegan Bradley hit back from six shots down with just 13 holes to play to beat fellow American Jim Furyk to the Bridgestone Invitational title.

Furyk was one in front with one to play, but double bogeyed the 18th to lose the tournament in Ohio by one.

Bradley, 26, then bunkered on his approach to the 18th but still made the putt for par and a final round of 64.

Justin Rose and Rory McIlroy were the best-placed Britons finishing level on eight under par.

The win for Bradley, who defends his USPGA title next week, all but wrapped up a spot on the Ryder Cup team.

Furyk on the other hand was bidding for his first PGA Tour title in two years.

Tiger Woods was also in action and was in good form on the final day, ahead of next week's PGA Championship at Kiawah Island.

He failed to break par in the first two rounds but the world number two signed off with a four-under-par 66, on a day where nearly three hours were lost to a violent thunderstorm.

"I played well today," Woods told reporters. "I hit a lot of good shots and never really sniffed making a bogey all day. So that was a good day."