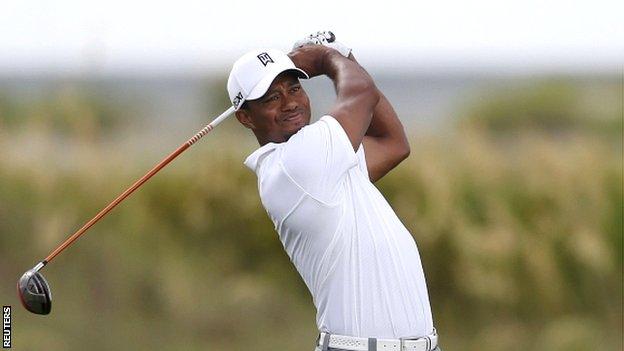 Tiger Woods admits he is frustrated by his failure to win recent majors, ahead of the US PGA Championship starting at Kiawah Island on Thursday.

Jack didn't finish his until he was 46, so if you go by that timetable I've got 10 more years.

Woods won the last of his 14 majors at the 2008 US Open and remains four short of the record held by Jack Nicklaus.

"I've played in three majors this year and didn't win any of them," he said. "Things have progressed but not winning a major doesn't feel very good."

Remarkably, the last 16 majors have been won by 16 different players, with Americans Bubba Watson and Webb Simpson becoming first-time major champions this year.

"Golf's getting deep, there are so many guys with a chance to win and that's kind of how sport is, the margin is getting smaller," said 36-year-old Woods, who missed the cut by six strokes at last year's US PGA.

The former world number one dropped out of the top 50 last year, for the first time in 15 years, but was joint third at last month's Open Championship at Royal Lytham & St Annes and has risen to number two in the world rankings behind Englishman Luke Donald.

"There may have been 16 different winners but what you have to look at is the cuts are getting lower," he said.

"The scores between the leader and the guy who is 70 and tied, sometimes it is 10 shots or less, which is amazing. If you've got margins that small, you're going to get guys who win once here and there."

Asked about his pursuit of the Nicklaus record, Woods added: "Jack didn't finish his until he was 46, so if you go by that timetable I've got 10 more years. That's 40 more majors, so I've got plenty of time.

"With the training regimes we have now and seeing guys play well, you could get on the right golf course and contend. You see what happened with Tom [Watson] being 59 [reaching a play-off at the 2009 Open Championship], Greg [Norman] almost did it at Birkdale at 53, so we can play late in our careers."

The Pete Dye-designed par 72 Ocean course at Kiawah Island, South Carolina, measures 7,676 yards and will be the longest in major championship history.

It is famous for hosting the 1991 Ryder Cup, when the United States won an acrimonious match dubbed "The War on the Shore."

By his high standards, Woods does not have a particularly impressive record on Dye courses in previous majors, finishing in a share of 28th in the 2010 US PGA at Whistling Straits and tied for 24th at the same venue in the 2004 version of the Championship.

Donald, 34, who is yet to win a major, tied for third at the 2006 US PGA and produced a strong display at last month's Open Championship, finishing in a share of fifth - five shots behind winner Ernie Els.

Compatriot Lee Westwood, who was second in two majors in 2010 and has also finished third or in a share of third on five occasions in majors, has slipped to fourth in the rankings after a disappointing 45th at Lytham.

The 39-year-old has won twice this year and was fifth at the Masters and 10th at the US Open.

Northern Ireland's Graeme McDowell, the 2010 US Open champion, has missed the cut in his last two appearances at the US PGA but has a consistent record in this year's majors, finishing joint 12th at the Masters, tied for second at the US Open and in a share of fifth at the Open.

Rory McIlroy, who was one shot behind Kaymer in the 2010 US PGA at the Ocean course, has failed to finish in the top 20 of a major since winning the 2011 US Open. He was a lowly 60th at Lytham.

The world number three, 23,has won once and recorded six top-10 finishes in 11 appearances on the US Tour this year, but missed the cut in his defence of the US Open.

The top 100 ranked players will all feature for the first time in the same event since the world ranking system came into effect in 1986.

Starting from the first hole:

Starting from the 10th hole: