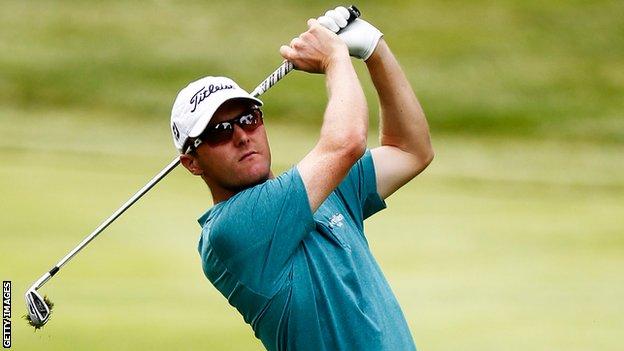 Michael Hoey was disqualified at the US PGA Championship as Rory McIlroy dropped two behind the leaders.

Hoey finished on four over after firing a 70 but was found to have moved sand away while identifying his ball at the ninth and then not replacing the sand.

That would have meant a two-shot penalty which he didn't sign for.

McIlroy's 75 in tough conditions left him on two under with Graeme McDowell on level and Darren Clarke safe on five over after both fired 76s.

Padraig Harrington also shot a 76 which left him on two over.

Hoey's second-round 70 was only one off joint-leader Vijay Singh's low round of the day and an eight-stroke improvement on his opening score.

But after signing his card he later brought an incident to the attention of officials.

Hoey, having embedded his ball deeply in a sandy area on the ninth hole, brushed away sand to identify it, but failed to replace the sand on his ball.

If this wind continues, I'm not going to be far away

It would have been a two-stroke penalty if his card had not been signed, but because it had the punishment was disqualification.

McIlroy struggled in the windy conditions at the Kiawah course.

McDowell, who won the 2010 US Open, believes he is still in a good position going into the weekend despite dropping four behind leaders Singh, Tiger Woods and Carl Pettersson.

"It was a very difficult set-up and on a calm day it would have been a tough golf course, but with a 25 and 30mph wind it was a very tough course.

"It was a case of survival. Vijay Singh shot three under and that is one of the best scores I've ever seen. Anything under 75 is a very good score.

"If this wind continues, I'm not going to be far away. I'm going to be right in touch going into the weekend."