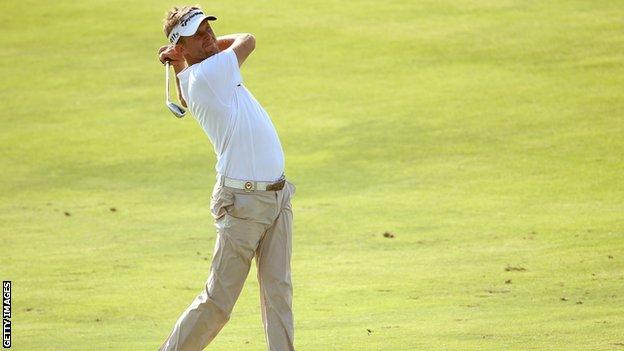 David Lynn says finishing second to Rory McIlroy at the 2012 US PGA Championship was "surreal".

"It's all a bit surreal at the moment," he said following a final round of 68.

"I was out on the golf course feeling really comfortable and when I stepped on the first tee I felt good and just thought, 'Why not?'"

Lynn's weekend performance far surpasses his only other experience of major championship golf, in the 2003 Open, where he finished 53rd.

"I've actually come off a little disappointed [after] missing two short putts at 15 and 18," he added.

"But I'm just going to have to sit back and look at it. It's an amazing finish."

However, Lynn, who only has one victory in 371 attempts on the European Tour, has now put himself in contention for a Ryder Cup place.

And he admits his major championship success is something that he looks forward to experiencing again in the future.

"I've been getting a real buzz out of the crowd shouting my name out," he said. "It was something that I want to experience again."

Thanks to this weekend's performance, Lynn, who plays his golf near his home in Trentham, has earned automatic qualification for next year's Masters, a feat that he did not realise he had achieved until after his final round.

"That's something that I've found out since I've come off the course," he said.

"As if performing like I have this week wasn't good enough, to be told that, it's like I'm on cloud nine."