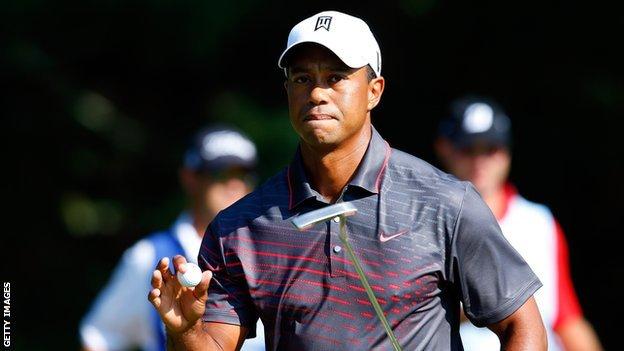 Tiger Woods put himself in contention to challenge at the Deutsche Bank Championship in Boston with a seven-under-par 64 on the first day.

Woods is tied for third, one shot behind fellow American Chris Kirk and a further stroke back on leader Seung-Yul Noh of South Korea.

Northern Ireland's Rory McIlroy is in a tie for sixth on six under.

England's Ian Poulter and Luke Donald are tied 10th on four under while Lee Westwood trails them by a shot.

Woods carded eight birdies and dropped just one shot, on the par-four ninth, as he looks to regain top spot in the FedEx Cup rankings.

The 14-times major champion is tied with Jeff Overton and Ryan Moore.

"I played really well today. I hit a lot of good shots, and on top of that I putted well - it was a nice little combination," said Woods.

Noh, 21, pulled away from the chasing pack with two birdies on the final two holes to finish one shot off the course record set by Vijay Singh in 2006 and equalled by Mike Weir two years later.

McIlroy started his round with a bogey but went on to make seven birdies to finish tied with Bryce Molder.

Nick Watney, who leads in the FedEx Cup race, shot a one over 72 to finish tied 74th after the opening day.